34,000 artillery rounds fired into the Gaza Strip since July 8, as well as hundreds of camera-guided Tammuz ground-to-ground missiles. By contrast, only 7,000 artillery shells were fired in the 2008-2009 war. 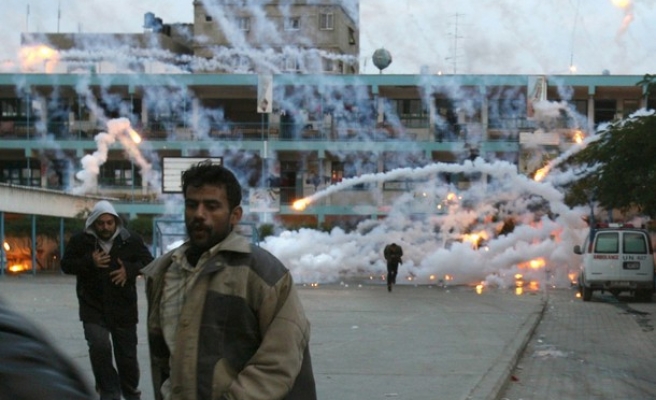 Israel fired almost five times more artillery shells into Gaza during the last month of fighting than in the 2008-2009 war there but did not use controversial white phosphorous this time around, an Israeli general said on Tuesday.

Criticised by human rights groups after the previous conflict for posing a burn risk to civilians by shelling the congested Palestinian enclave with white phosphorous to create smoke-screens, Israel said last year it was phasing out those rounds.

Though Israel reprimanded two senior army officers over a 2009 strike near a U.N. compound in the Gaza Strip that involved smokescreen shells, Riftin saw "no legal barrier to using white phosphorous." His corps plans to stock up on U.S.-supplied M825 rounds containing the incendiary chemical in reduced form.

White phosphorous was being shunned, for now, mainly because "it photographs badly", Riftin said - a reference to the distinctive octopus-like clouds the shells formed over Gaza and ensuing showers of potentially lethal embers on civilian areas.

Smoke produced by M116 shells disperses more quickly than white phosphorous smoke, so more of them had to be used, Riftin said, putting the number at around half of some 34,000 artillery rounds his corps fired into the Gaza Strip since July 8, as well as hundreds of camera-guided Tammuz ground-to-ground missiles.

Gaza officials say 1,939 Palestinians, mostly civilians, have died in Israel's offensive - many of them in intensified bombardments in northern and southern towns.

Israel has caused widespread devastation in Gaza. According to the United Nations, at least 425,000 displaced people are in emergency shelters or staying with host families. Nearly 12,000 homes have been destroyed or severely damaged by Israeli attacks.

Palestinians have not reported human casualties from Israel's smoke-screens during the recent fighting, though some penned-in livestock and birds died, apparently asphyxiated.

Israel said that during a few Gaza battles in 2009 its forces used weaponised white phosphorous.

USA supplies billions of $$ off weapons annually to Israel; they have to use them to make room for new supplies. The USA degraded the American Indians to make them more pliable; the same is in progress through brutalization of the Palestinians.