The report also criticised Israel's policy of detaining indefinitely thousands of African migrants, pending resolution of their cases, in a desert facility. 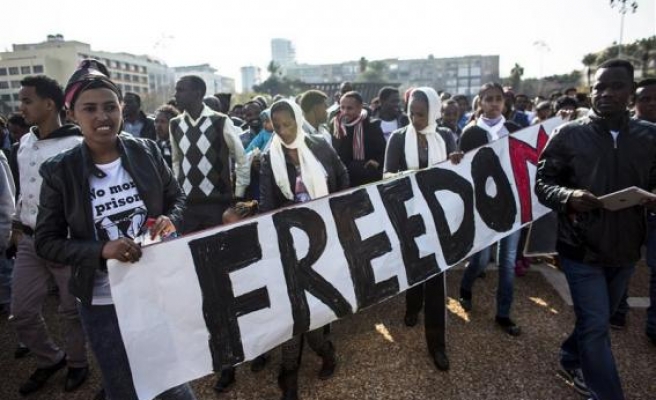 Human Rights Watch accused Israel on Tuesday of coercing thousands of Sudanese and Eritrean migrants to leave since last year in a report that documented alleged cases of abuse against some of those who returned home.

The rights group said Israel had denied proper asylum-seeking procedures to many of the more than 40,000 migrants still in the country, in violation of United Nations guidelines.

Israel said all of its actions were legal.

The report also criticised Israel's policy of detaining indefinitely thousands of African migrants, pending resolution of their cases, in a desert facility. Most of them entered illegally through a once porous border with Egypt after 2011.

The migrants' plight has raised strong emotions in Israel, founded as a homeland for Jews after centuries of persecution.

Prime Minister Benjamin Netanyahu has dubbed the migrants "infiltrators" and some Israeli politicians have called them a threat to the country's Jewish fabric. But Israeli rights groups have urged a more sympathetic approach to asylum requests.

To coax the detainees and other migrants to leave, Israel offers to pay their airfare and offers other stipends. It says those who accept the funds and repatriation do so freely.

The Human Rights Watch (HRW) report said about 6,750 Sudanese and Eritreans left Israel from January 2013 through July 1 this year.

Israeli figures from August show the number has risen since to about 8,000, said Gerry Simpson, senior HRW researcher and author of the report. He accused Israel of "mass refoulement" -- forcing people entitled to refugee protection under international law to risk their lives through repatriation.

Simpson said HRW saw Israel's policy as amounting to "coercive measures" and part of a policy of "unlawful forced return, torture and other serious harm, affecting thousands of Eritreans and Sudanese".

Israel's Interior Ministry, in response to the report, said Israel "is acting in accordance with the law in a measured way to confront the phenomenon of illegal infiltrators".

The policy had "shown results" in that the number of migrants agreeing to leave Israel had tripled in the past year, the ministry's statement said.

HRW's report documented six cases in which Sudanese men who returned home from Israel were jailed, interrogated or tortured. One said he had spent weeks in solitary confinement, and another gave an account of having been subjected to electric shocks, beatings and scalding.

Another Sudanese man was charged with treason for having travelled to Israel, a country regarded by Sudan as an enemy.