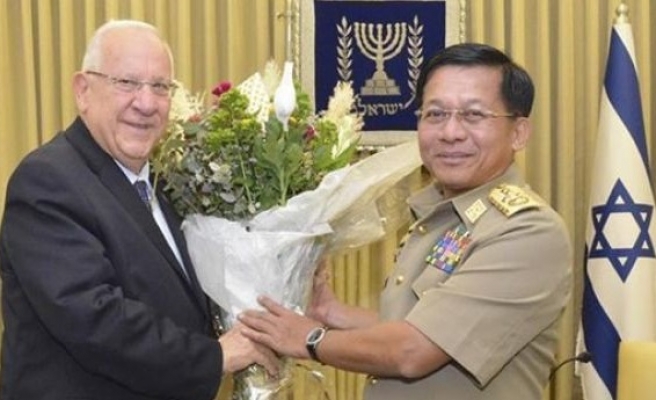 Accompanied by a delegation of senior military officers, Hlaing toured a number of Israel military industries and bases, including Israel Aerospace Industries, Elbit Systems, Elta, the Israel Air Force base at Palmahim, the Ashdod naval base and the Gaza Division base.

In Ashdod, Hlaing wrote on Facebook, he and his delegation "rode and examined" a Super Dvora 3 patrol boat, “which is the same type of speed coastguard vessel Myanmar Navy has ordered" from Israel.

Myanmar is currently under sanction by both the United States and the European Union for the harsh military junta that was imposed on the country.

Besides Myanmar is known worldwide denying the existence of Rohingya Muslims and passing contentious laws on race and religion. Myanmar's current president is apparently takes a lot of pride for his racist anti-Muslim policies and hopes they will help him win re-election.

While many of those sanctions have been scaled back since the country elected a civilian government and began implementing reforms in 2011, the EU still maintains an embargo on arms sales to Myanmar.

Despite the EU embargo, Israel has been selling weapons to the country for decades, including air-to-air missiles and 155mm cannons.

Myanmar had had diplomatic ties with Israel since 1955 and reportedly planned the visit as a means to open a new chapter of bilateral relations and security cooperation.

Israel has also recently made more of a concerted effort to develop relations and advance cooperation with other Asian countries.