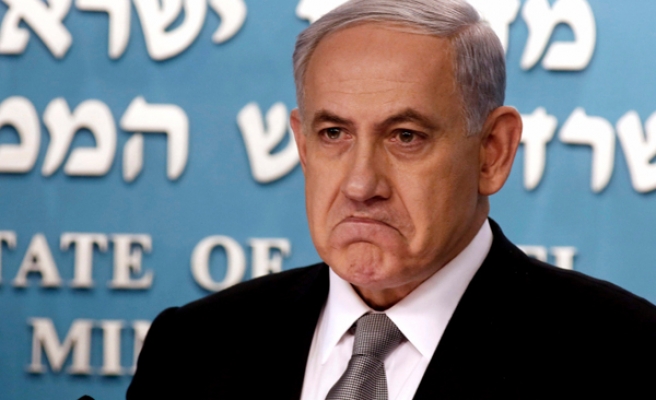 Seeking to cast aside doubts about his commitment to a two-state solution, Netanyahu said “let me state unequivocally, and here's the acid test, I'm ready to begin such negotiations immediately, without preconditions”.

“The best formula for achieving peace remains two states for two peoples in which a de-militarized Palestinian state finally recognizes the Jewish state,” he told attendees at the annual American Israel Public Affairs Committee conference via video link from Jerusalem.

"This is all double-speak, and wouldn't mean anything had he had a more scrutinizing American audience to reject it," she said. "The sad truth is that the rhetoric of Benjamin Netanyahu, as vapid and hollow as it is, will have play amongst an American public precisely because of the structural relationship that we maintain with Israel."

Netanyahu said that he expects the Obama administration to veto any UN resolution that would seek to pressure Israel into an agreement, saying "it could actually kill the chances of peace for many, many years".

"Such an effort in the UN would only convince the Palestinians that they can stab their way to a state. Mind you, not a state next to Israel, but a state instead of Israel," he said.

He used part of his speech to display video of Palestinian youths being incited to take part in the kind of violence that has been on the rise since tensions escalated over the al-Aqsa mosque complex last summer.

The disturbing footage that included children running through the streets knives in hand hit an apex when a small girl, holding a knife as well, tells Palestinian youths in the West Bank to "Stab! Stab! Stab! Stab! Stab!"

She added: "It's really manipulative and dishonest for someone who says he wants to establish peace to then use these inciteful messages. For every image of a little Palestinian girl holding a knife saying 'Stab! Stab! Stab' you can find at least a dozen images of adults who are actually burning Palestinian homes -- settlers who are burning their homes and cheering to that."

More than 200 Palestinians have been killed since October -- most shot dead by Israeli troops following alleged knife or vehicular attacks.

Thirty-four Israelis have been killed in Palestinian attacks during the same period in a series of knife, car and shooting attacks.