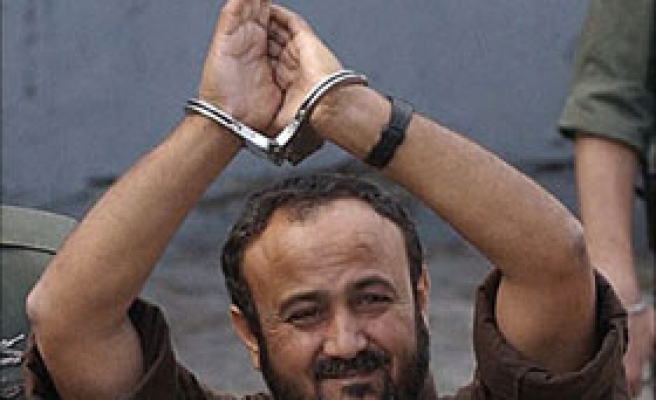 Israeli authorities ordered jailed Palestinian leader Marwan Barghouti placed in solitary confinement after he smuggled a statement out of prison in which he voiced support for the Palestinian resistance against Israel, a Palestinian NGO said Wednesday.

Officials at central Israel's Hadarim Prison told Barghouti's cellmates that the decision to isolate him came as "punishment" for the smuggled statement, according to the Palestinian Prisoners' Society.

The smuggled statement by Barghouti, a leading member of Mahmoud Abbas' Fatah movement, was read out on his behalf one day earlier at a Fatah rally in Ramallah held to mark ten years since the death of late Fatah leader Yasser Arafat.

In his letter, Barghouti, a Palestinian lawmaker, called on his fellow Palestinians to reconsider armed resistance as the "surest means" of defeating Israel's decades-old occupation.

Barghouti also asserted that Arafat's death, believed by many to have been an assassination, was an "Israeli-American operation."

"It is proof that no matter what measures Israel takes against him, he will always remain true to the Palestinian people's aspirations and Arafat's cause," Fares added.

Barghouti, 55, has been in jail in Israel since 2002, when he was convicted of murder and sentenced by an Israeli court to 40 years in prison.

Barghouti had been a leading symbol of the first Palestinian Intifada in 1987.

He spent seven years in Israeli-imposed exile in Jordan before returning to the West Bank in 1994 after the signing of the Oslo Accords, which created the PA and granted limited Palestinian governance over the West Bank and Gaza Strip.

Tension has mounted in the West Bank and Jerusalem since Israel's temporary closure of the Al-Aqsa Mosque late last month in a move described by Abbas as a "declaration of war."

The mosque compound was shut for several hours after an extremist rabbi was injured in a drive-by shooting in West Jerusalem.

Unrest mounted further when Israeli forces later killed a young Palestinian man suspected of shooting the rabbi in a raid on his East Jerusalem home.

Further aggravating the situation, several Israeli MPs have also forced their way into the Al-Aqsa Mosque complex in recent days, drawing the ire of Muslim worshippers and official condemnation from Arab and Muslim countries.

Israel occupied East Jerusalem and the West Bank during the 1967 Middle East War. It later annexed the East Jerusalem in 1980, claiming it as the capital of the self-proclaimed Jewish state – a move never recognized by the international community.