Israel refuses to release Palestinian on brink of death

Hunger-striking journalist Muhammad al-Qiq is on brink of death with Amnesty International calling for his release. 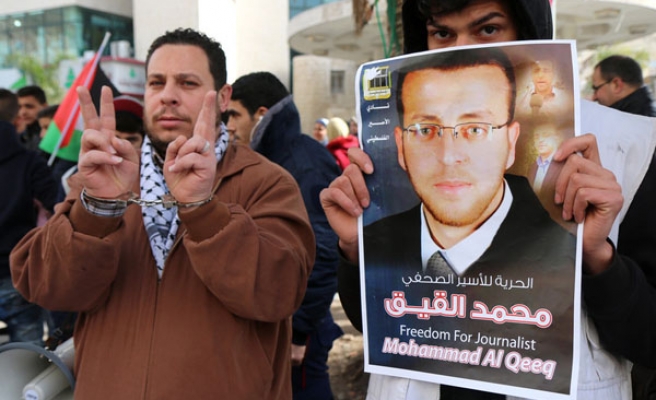 An Israeli court has refused to release journalist Muhammad al-Qiq and will be forced to remain in detention, despite his critical condition after 64 days of hunger strike.

Al-Qiq has consumed only during his two-month protest of his detention which has been without charge or trial under an administrative detention order issued by an Israeli military court.

Jawad Boulos of the Palestinian Prisoners Society said al-Qiq is partially paralyzed and has trouble speaking. His legal team warned that his organs are at risk of failure any day.

Ashraf Abu Sneina, a lawyer with the Palestinian Authority's Committee for Prisoners' Affairs, visiting Al-Qiq earlier in the day, said al-Qiq was unconscious, couldn't speak, and said that that he had exhibited "sudden symptoms that could lead to his death."

The head of the committee, Issa Qaraqe, accused Israel of "reckless and indifferent treatment of al-Qiq," which he said stemmed from "a decision by the extremist Israeli government and its intelligence to let him die."

The 33-year-old journalist from the southern West Bank town of Dura has been on hunger strike to protest his administrative detention, internment without trial or charge, since Nov. 24.

Qaraqe called on all appropriate organizations and human rights groups to exert every means available to pressure Israel to free al-Qiq, "because if he dies as a martyr, the situation will deteriorate both among Palestinians inside and out of Israeli prisons."

"Israel has to be aware that it will pay a heavy toll if Muhammad dies in custody," Qaraqe said.

As al-Qiq is being held in administrative detention, any possible evidence against him has been kept secret by the Israeli authorities. However Amnesty International reported last week that the military judge at the Ofer Military Court said al-Qiq's file "accuses him of 'incitement,' of working with media associated with Hamas ... and also of being a 'threat to the security of the area.'"

Amnesty demanded Israel either release or charge al-Qiq, saying that he has been mistreated and tortured in ways that violate international law.