Palestinian health officials said 27 Palestinians had been killed since Israel launched its ground offensive. Palestinians have called for day of rage and massive demonstrations after the Friday prayers to protest the Gaza onslaught 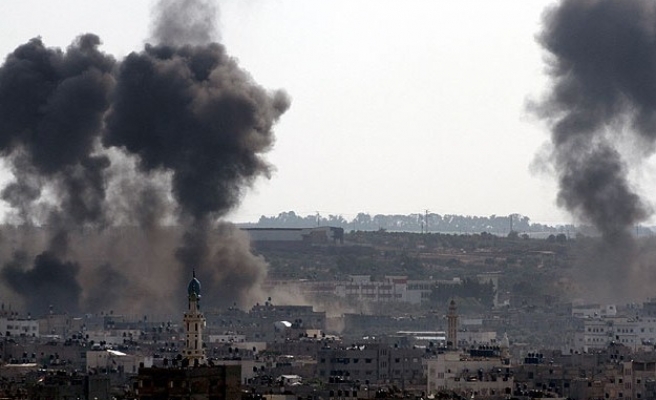 Israel stepped up its land offensive in Gaza with artillery, tanks and gunboats on Friday and declared it could "significantly widen" an operation Palestinian officials said was killing ever greater numbers of civilians.

Israeli gunboats lit up the sky with their fire before dawn while helicopters fired into the coastal enclave. Hamas fired mortar rounds at the invading troops and rockets across the border at the southern Israeli towns of Ashdod and Ashkelon.

Palestinian health officials said 27 Palestinians, including a baby, two children and a 70-year-old woman, had been killed since Israel poured ground forces into the densely-populated strip of 1.8 million Palestinians on Thursday.

The action followed 10 days of barrages against Gaza from air and sea and hundreds of rockets fired by Hamas into Israel.

"We chose to start this operation after we exhausted other options and reached the conclusion that without it we could pay a much higher price," Israeli Prime Minister Benjamin Netanyahu told reporters before a special cabinet session at Tel Aviv military headquarters. "The main goal is to restore quiet."

"My instructions...to the Israeli army, with the approval of the security cabinet, is to prepare for the possibility of a widening, a significant widening of the ground operation."

He did not say what form a widened operation might take. Israel says its forces have focused so far on seeking out tunnels Palestinian fighters might use for cross-border raids.

One such infiltration was narrowly thwarted on Thursday, with the army saying it had repelled 13 Hamas gunmen after they emerged from a tunnel close to an Israeli farming community.

To back up regular forces, Israel said it was calling up 18,000 military reservists, adding to 30,000 already mobilised

Hamas spokesman Sami Abu Zuhri responded with defiance to the Israeli escalation, saying: "Netanyahu is killing our children and will pay the price. The ground invasion doesn't frighten us and the occupation army will sink in Gaza's mud."

Israel said one one of its soldiers was killed and several others wounded in Gaza clashes overnight. Hamas said its men were shelling the tanks with mortars and setting off bombs against troops crossing the sandy frontier under smokescreens.

In all, 258 Palestinians, most of them civilians, have been killed since the fighting began on July 8, Gaza officials said.

Infra-red video released by the military showed six tanks rolling into Gaza by night, followed by two long infantry columns, after a soldier opened a gate in the border fence.

"A great number of soldiers are in action in the Gaza Strip, soldiers are overtaking their targets, tunnels, Hamas targets," Almoz said, and several "points of friction" with gunmen.

Among Friday's fatalities were three teenage brothers, who medics said were shelled by an Israeli tank inside their house, at a residential building in Beit Lahiya, a northern town.

Though they are die-hard foes, Israel says it does not intend to topple Hamas.

Live television showed rockets shot down by Israel's Iron Dome interceptor. No casualties were reported from the salvoes.

The soldier was Israel's second fatality in eleven days of fighting. A rocket attack killed a civilian two days ago.

Among sites targeted by Israeli forces in Gaza on Friday was the Al-Jawhara building housing various media outlets, medics and witnesses said. One journalist was wounded.

Israel calls the Gaza offensive a response to mounting rocket salvoes, more than 100 a day, fired by the Palestinians into its cities, sending hundreds of thousands of Israelis dashing to shelters as far north as the Tel Aviv business hub.

Palestinians have called for day of rage and massive demonstrations after the Friday prayers to protest the Gaza onslaught.

Clashes erupted in the early hours of Friday between Palestinians and Israeli policemen inside Al-Aqsa Mosque compound and the Bab al-Huta neighborhood in the Old City of Jerusalem.

"The Israeli police used batons against the worshipers before they were expelled them from Al-Aqsa Mosque," he added.

The witness said the Israelis had closed the gates of Al-Aqsa Mosque compound and banned worshipers under the age of 50 from entering.

The Israeli army had imposed restrictions on the entry of Palestinian worshipers into the compound ahead of the weekly Friday prayers.

Meanwhile, clashes broke out between Israeli forces and Palestinians in Bab al-Huta neighborhood in the old city of Jerusalem.

Israel has deployed thousands of forces and erected roadblocks at major junctions leading to the Old City.

Israel occupied East Jerusalem during the 1967 Middle East War. It later annexed the holy city in 1980 – in a move never recognized by the international community – claiming it as the capital of the self-proclaimed Jewish state.

Palestinian organizations had called for a day of rage and massive demonstrations in the West Bank after the Friday prayers to protest the ongoing Israeli onslaught against the blockaded Gaza Strip.

Israel last mounted a large-scale invasion of the Gaza Strip during a three-week war in late 2008 and early 2009 that claimed 1,400 Palestinian and 13 Israeli lives.