Israel have secretly built up its own stockpile of chemical and biological weapons decades ago, reports Foreign Policy 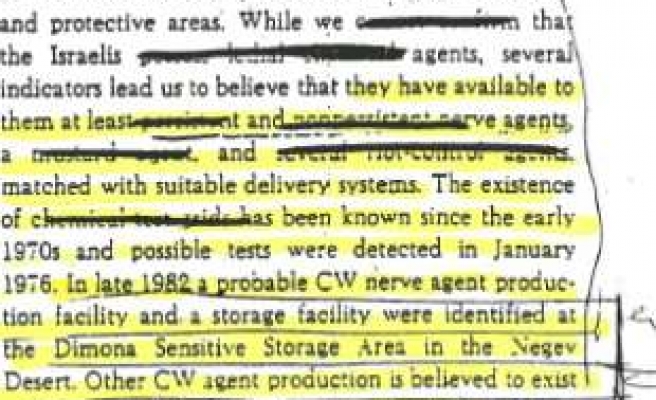 Israel reportedly have built up its own stockpile of chemical and biological weapons decades ago, reports Foreign Policy, citing CIA documents.

According to RT report, US intelligence agencies are almost certain that Israel possesses a stockpile of nuclear weapons that the Middle Eastern country developed in the 1960s and 1970s as part of its defense against a possible attack from Arab neighbors.

The FP report is based on a page from a secret, Sept. 15, 1983, CIA Special National Intelligence Estimate entitled “Implications of Soviet Use of Chemical and Toxin Weapons for US Security Interests.” Part of the document was released in 2009 in the National Archives, but the piece on Israel was extracted from that version. For years, arms control analysts have speculated that Israel built up a range of chemical and biological weapons to complement its alleged nuclear arsenal.

According to the reports, Experts especially focused on the Israel Institute for Biological Research (IIBR) at Ness Ziona, located 20 kilometers south of Tel Aviv. The highly-classified research center operated and funded by the Israel Ministry of Defense is alleged to be a military facility manufacturing chemical and biological weapons.  The IIBR was allegedly involved in several “accidents.”

However, to date not much evidence has been published about Israel possessing chemical or nuclear weapons. The newly-discovered CIA memo may be the strongest indication yet, FP writes.

“While we cannot confirm whether the Israelis possess lethal chemical agents,” the CIA document is quoted as saying, “several indicators lead us to believe that they have available to them at least persistent and non-persistent nerve agents, a mustard agent, and several riot-control agents, marched with suitable delivery systems.”

The “non-persistent agent” mentioned in the secret document was likely sarin – a nerve gas that was allegedly used in the August 21 chemical weapons attack in a Damascus suburb, FP writes.

The report also claims that in January 1976, American intelligence detected “possible tests” of Israeli chemical weapons very likely to have taken place in the Negev Desert.

It is unknown whether Israel still keeps its alleged stockpile of chemical weapons. In 1992, the Israeli government signed the Chemical Weapons Convention, which outlaws such arms. Crucially, however,  Israel has not ratified the agreement.

The author of the FP article claims that after a search on Google Maps, he found what he believes to be “the location of the Israeli nerve agent production facility and its associated chemical weapons storage area” in the Negev Desert east of the village of al-Kilab, about 10 miles west of the city of Dimona.

The document can be seen here