Israel told UN it will not stop using phosphorous bombs in future wars in response to war crimes accusations on deadly Gaza offensive. 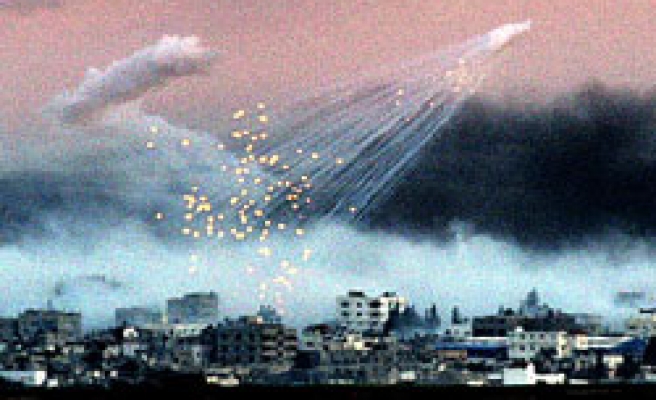 Israel told UN it will not stop using phosphorous bombs in future wars in response to war crimes accusations on deadly Gaza offensive.

Israel posted its new report on the 2008-2009 Gaza attack on the Foreign Ministry's website, that also was delivered to the office of U.N. Secretary-General Ban Ki-moon on Monday.

Israel killed nearly 1500 Palestinians, a third of them children and wounded more than 5000 Palestinians in the 22-day military aggression in December 2008 on Gaza.

A U.N. report by a team headed by South African jurist Richard Goldstone was issued in September.

"The Israeli operations were carefully planned in all their phases as a deliberately disproportionate attack designed to punish, humiliate and terrorize a civilian population," the report said.

However, seeing "future wars", Israel pledged in the new report, that Israel's army is taking steps to reduce the number of civilian casualties.

"We came to the conclusion on the basis of the facts we found that there was strong evidence to establish that numerous serious violations of international law, both humanitarian law and human rights law were committed by Israel during the military operation in Gaza," the Goldstone report said.

"The IDF (Israel Defense Forces) has ... implemented operational changes in its orders and combat doctrine designed to further minimize civilian casualties and damage to civilian property in the future," the report said.

Israel also did not say to stop using phosphorous bombs in future attacks, but will "restrict the use of white phosphorous."

Israel said in the report it was "planning to impose restrictions on using white phosphorous weapons".

"As a consequence, the IDF is in the process of establishing permanent restrictions on the use of munitions containing white phosphorus in urban areas," the report said.

The firing of white phosphorous shells and the use of high explosive artillery shells were listed as "violations of humanitarian law," in the Goldstone report.

A November 2009 resolution of the 192-nation General Assembly demanded that the Israelis and Palestinians credibly investigate allegations of war crimes.

The United Nations has yet to react to the Israeli report.

Israel is under pressure to accept another international investigation into a deadly May 31 raid on a flotilla of aid ships that tried to break through the Israeli siege of Gaza. Israeli troops killed nine Turkish activists on the aid ship in international waters.

Israel repeatedly refused UN proposal on international probe, as Turkey demands, but instead has launched a local probe whose panel members complain of "being powerless".