Israeli official said that as a result of the Gaza crisis, three new Iron Dome units were now "in the pipeline". 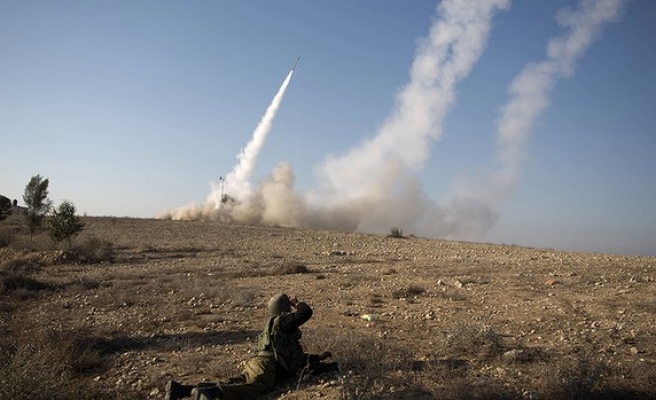 Israel has found funding for three new Iron Dome rocket interception batteries, an Israeli official said on Tuesday, a week into its attacks towards Gaza.

Israel had seven Iron Domes set up to shoot down missiles when cross-border fighting with Hamas-led fighters surged on July 8, and has since brought two more into service, Israel's Defence Ministry said.

Speaking to Reuters on condition of anonymity, the Israeli official said that as a result of the Gaza crisis, three new Iron Dome units were now "in the pipeline".

Israel accepted the terms of an Egyptian-proposed truce on Tuesday to end its air strikes and naval barrages on Gaza that Palestinian officials say have killed at least 184 people, mostly civilians, since Tuesday last week.

But Hamas, which controls Gaza, did not immediately follow suit and promise to end rocket attacks on Israeli territory, saying it had not been consulted by Cairo.

The Israeli official did not expand on where the money for the new rocket interceptors came from. But Yair Ramati, head of the Defence Ministry's missile defence agency, told reporters at the weekend that all but one of the Iron Dome batteries in the field were paid for with U.S. grants.

The U.S. embassy in Israel did not immediately comment about the planned increase in the Iron Dome deployment on Tuesday.

Before the Gaza crisis, Israeli officials had said they needed 13 Iron Domes to provide sufficient nationwide protection on the Palestinian front as well as volatile borders with Lebanon and the Egyptian Sinai. But some predicted Israel would fall short of that number given deep defence budget cuts.

Israeli defence industry sources have said in the past that Iron Dome batteries cost about $50 million each but added that this would be reduced as state-owned manufacturer Rafael Advanced Defense Systems Ltd. refined its production techniques.

Israeli and U.S. officials said Iron Dome, which is designed to shoot down rockets threatening to hit residential areas while ignoring those falling wide, has scored a 90 percent success rate during the Gaza fighting.