40 percent of those killed in ongoing Israeli attacks in the Gaza Strips were women and children. 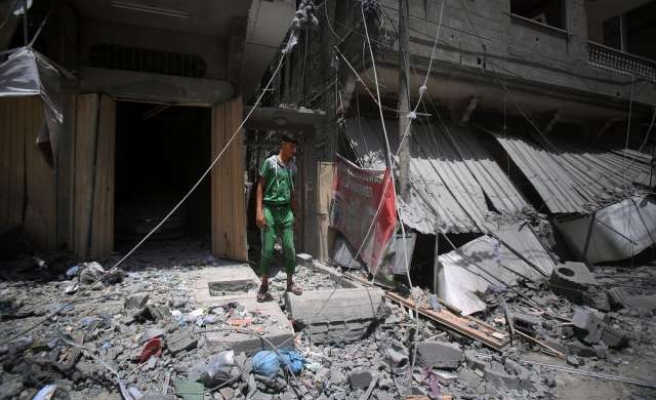 The Palestinian Health Ministry has accused Israel of using banned weapons in pounding the Gaza Strip.

He accused Israel of using banned weapons in striking the Gaza Strip, home to 1.8 million Palestinians.

"Medical teams have found wounds on the bodies of those killed and injured that are caused by the banned DIME weapons," the Palestinian official said.

"Foreign doctors in Gaza have confirmed that Israeli missiles and shells are destructive and internationally banned," he added.

Abul Resh cited that about 40 percent of those killed in ongoing Israeli attacks in the Gaza Strips were women and children.

"Children and women make up around 62 percent of those injured in the attacks," he said, going on to appeal to human rights organizations and the international community "to pile pressures on Israel to halt is aggression on the Gaza Strip".

Israeli military aircraft dropped leaflets on a town in northern Gaza Strip in the early hours of Sunday, urging the residents of specific neighborhoods to leave their homes, eyewitnesses said.

According to the witnesses, leaflets were dropped on Beit Lahia town, calling on the residents of several areas in the town to vacate their homes because the Israeli army is set to target these areas, which the army claims are used as launch points for rockets fire into Israel.

The witnesses said the leaflets set the areas to be targeted  as the region stretching between Attatrah and Salattin neighborhoods as well as the west and north of Jabalia refugee camp.

"For your safety, you have to vacate your homes and go to the south of Jabalia through the Fallujah road until 12pm on Sunday," an eyewitness read out one of the leaflets to Anadolu Agency.

"All those who violate these instructions are exposing their and the families' lives to danger," it added.

At least 163 Palestinians, mostly civilians, have been killed and hundreds injured since Monday when Israel launched "Operation Protective Edge" in the Gaza Strip with the stated goal of ending rocket fire from the strip.

Since then, Israeli warplanes have been pounding the Gaza Strip with hundreds of airstrikes as ground troops remain amassed on the Strip's borders in advance of a possible ground assault.

Gaza-based resistance factions, for their part, have continued to fire hundreds of low-yield rockets into Israel in response to ongoing Israeli airstrikes.

No Israeli fatalities have been reported thus far, with Israel's anti-missile defense systems intercepting numerous Gaza rockets, some of which have reached Tel Aviv.