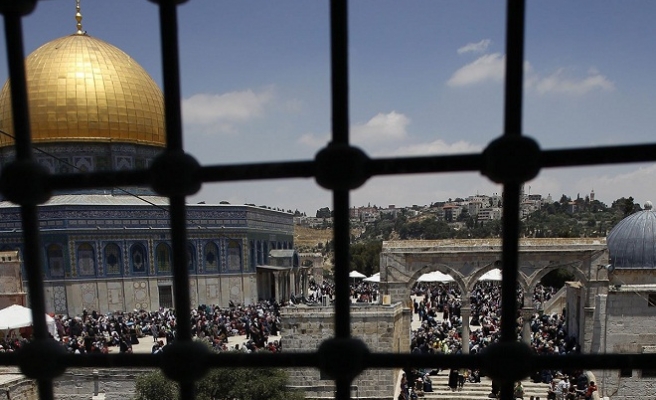 Dozens of Israeli forces on Tuesday forced their way into the flashpoint site – for the third day in a row – and used teargas and rubber bullets to disperse Muslim worshippers, leaving dozens of the latter injured.

The incursions have been condemned by the Organization of Islamic Cooperation (OIC), the Arab League and the Arab Parliament.

Saudi King Salman has appealed to UN chief Ban Ki-moon and members of the Security Council for "urgent measures" after clashes at Jerusalem's Al-Aqsa mosque compound.

"He called for serious and speedy international efforts and for the intervention of the Security Council to take all urgent measures to stop these violations," King Salman's office said.

Algeria’s main Islamic party, meanwhile, the Movement of Society for Peace, called on the Arab League to activate an Arab joint defense pact and end all moves towards normalizing relations with Israel.

“No Palestinian state without Jerusalem,” Palestinian President Mahmoud Abbas said Wednesday, condemning Israel’s provocations and warning that the Palestinian Authority “will not allow Israel to divide Al-Aqsa spatially or temporally."

Former Lebanese Prime Minister Saad Hariri, for his part, described the violations as a “premeditated and deliberate crime”.

On Sunday, Monday and Tuesday, Israeli security forces used rubber bullets, teargas and stun grenades to disperse Muslim worshipers near the Al-Aqsa Mosque and the Al-Qibli Mosque, which is also located in the Al-Aqsa complex.

For Muslims, Al-Aqsa represents the world's third holiest site. Jews, for their part, refer to the area as the “Temple Mount”, claiming it was the site of two Jewish temples in ancient times.

In September of 2000, a visit to Al-Aqsa by controversial Israeli politician Ariel Sharon sparked what later became known as the Second Intifada – a popular uprising against the Israeli occupation in which thousands of Palestinians were killed.

Israel occupied East Jerusalem – in which Al-Aqsa is located – during the 1967 Middle East War. It later annexed the city in 1980, claiming it as the capital of the self-proclaimed Jewish state in a move never recognized by the international community.