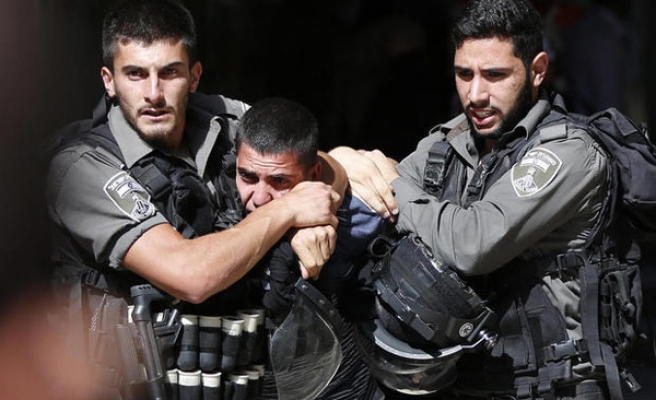 “At least 60 Special Forces troops and police stormed the mosque compound at dawn and sealed the Al-Qibali Mosque with iron chains,” one eyewitness said.

Witnesses at the scene said Israeli security forces had fired teargas and stun grenades inside the mosque itself.

Omar al-Qiswani, the mosque’s Palestinian director, told Anadolu Agency that he personally had been assaulted – along with several Muslim worshipers – while trying to prevent Israeli troops from entering the mosque.

“Israeli forces went up to the roof of the Al-Qibali Mosque, smashing windows and spraying pepper gas inside the building,” he said.

Israeli forces, he said, had used rubber bullets and teargas to disperse Muslim worshipers who had gathered to protest the settlers’ incursion.

“Four Palestinians were hurt by rubber bullets while at least 25 others suffered temporary asphyxia due to teargas inhalation,” al-Khatib said.

Israeli forces also sealed the gates of the mosque and prevented women and men under 50 from entering it.

For Muslims, the Al-Aqsa Mosque complex represents the world's third holiest site. Jews, for their part, refer to the area as the "Temple Mount," claiming it was the site of two Jewish temples in ancient times.

Israel occupied East Jerusalem during the 1967 Middle East War. It later annexed the city in 1980, claiming it as the capital of the self-proclaimed Jewish state – a move never recognized by the international community.

In September 2000, a visit to Al-Aqsa by controversial Israeli politician Ariel Sharon sparked what later became known as the "Second Intifada," a popular uprising against the Israeli occupation in which thousands of Palestinians were killed.