Israeli escalations in occupied East Jerusalem has threatened to ignite the conflict region-wide. 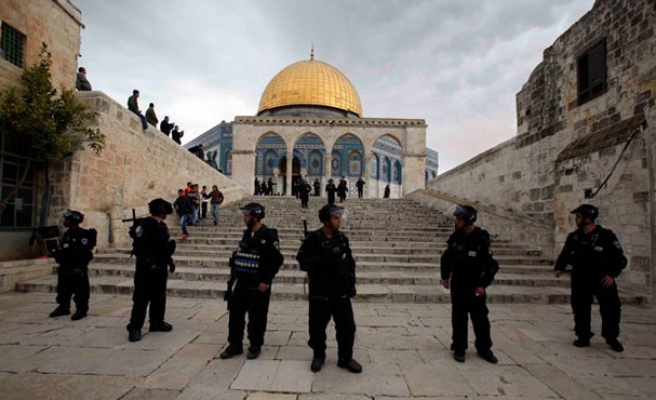 Palestinian forces from across the political spectrum on Sunday lined up to condemn incursions by Israeli security forces and Jewish settlers into occupied East Jerusalem’s flashpoint Al-Aqsa Mosque complex.

“We will not stand idly by before these assaults,” he asserted.

Palestinian Prime Minister Rami al-Hamdallah, for his part, warned the international community that Israeli escalations in East Jerusalem threatened to ignite conflict throughout the entire region.

“The Israeli government will bear the consequences of its policy of targeting the Al-Aqsa Mosque,” he said.

Ayman Odeh, head of the Arab Joint List in the Knesset (Israel’s parliament), declared that the self-proclaimed Jewish state wanted to drag the entire region into a “religious war”.

“Ongoing tension at the Al-Aqsa and the desecration of Islamic and Christian holy sites will lead to violent repercussions,” he warned.

Saeb Erekat, secretary-general of the Palestine Liberation Organization (PLO), meanwhile, denounced what he called Israeli “violations” against the iconic mosque.

“Israel is seeking to divide the mosque compound [between Muslims and Jews], spatially and temporally,” he asserted.

Izzat al-Rishq, a leading member of Palestinian resistance movement Hamas, for his part, described the participation of Israeli Agriculture Minister Uri Ariel in the storming of the mosque compound -- alongside scores of Jewish settlers -- as a “war crime”.

“But the steadfastness of our people will foil Israel’s plans to destroy the Al-Aqsa Mosque,” he said.

Deputy Head of the Islamic Movement in Israel, Kamal al-Khatib, said that Sunday’s incursions constituted “an assault on the dignity of the Arab and Muslim nation”.

“Dozens of worshipers were injured today,” he said. “The Muslim nation must take serious action to stop these Zionist crimes against Al-Aqsa.”

Meanwhile, the Organization of Islamic Cooperation (OIC), the Arab Parliament, Egypt and Morocco have all condemned the Israeli forces' incursions.

Secretary-General of the OIC Iyad Madani on Sunday called on the international community, especially the U.N. Security Council, to act in order to put an end to “repeated Israeli aggressions” and provide protection for the Palestinian people and their holy places, according to a statement published on the OIC official website.

Madani also stressed "the need not to turn a blind eye to Israeli crimes in the Al-Aqsa Mosque, which will, eventually, fuel violence and tension in the region and the whole world", the statement added.

On Sunday, Israeli security forces used teargas, stun grenades and rubber bullets to disperse Muslim worshipers who had congregated near the Al-Aqsa and Al-Qibali mosques.

“At least 60 Special Forces troops and policemen stormed the mosque compound at dawn and sealed the Al-Qibali Mosque with iron chains,” one eyewitness told Anadolu Agency.

Witnesses at the scene said Israeli security forces had fired teargas and stun grenades inside the mosque itself.

Omar al-Qiswani, the mosque’s Palestinian director, told Anadolu Agency that he had been personally assaulted -- along with several Muslim worshipers -- while trying to prevent Israeli troops from entering the house of worship.

“Israeli forces went up to the roof of the Al-Qibali Mosque, smashing windows and spraying pepper gas inside the building,” he said.

At one point, scores of extremist Jewish settlers -- led by Israel’s agriculture minister and backed by dozens of Israeli police and soldiers -- forced their way into the mosque compound.

Israeli forces, he said, had used rubber bullets and teargas to disperse Muslim worshipers who had gathered to protest the settlers’ incursion.

“Four Palestinians were hurt by rubber bullets while at least 25 others suffered temporary asphyxia due to teargas inhalation,” al-Khatib said.

Israeli forces also sealed the gates of the mosque and prevented women and men under 50 from entering it.

In the blockaded Gaza Strip, meanwhile, hundreds of Palestinians staged demonstrations condemning the Israeli violations and demanding an adequate response from the Cairo-based Arab League.

Palestinian resistance factions in Gaza -- including Hamas, Islamic Jihad, the Popular Resistance Committees and the Mujahideen Movement -- held a press conference at which they called on leaders and people of the Muslim and Arab world to “shoulder their responsibility to safeguard Al-Aqsa”.

“We denounce the continuous criminal violations against Al-Aqsa and attempts to enforce temporal and spatial divisions that are ultimately aimed at Al-Aqsa’s destruction,” Hamas leader Ismail Radwan said on behalf of Palestinian resistance factions.

Feras al-Dabas, a spokesman for Jerusalem’s Religious Endowments Directorate, told Anadolu Agency that 30 Palestinians had been injured in Sunday’s clashes, which, he said, had “pitted the people of the of city against the Israeli police”.

For Muslims, the Al-Aqsa Mosque complex represents the world's third holiest site. Jews, for their part, refer to the area as the "Temple Mount," claiming it was the site of two Jewish temples in ancient times.

In September 2000, a visit to Al-Aqsa by controversial Israeli politician Ariel Sharon sparked what later became known as the "Second Intifada", a popular uprising against the Israeli occupation in which thousands of Palestinians were killed.

Israel occupied East Jerusalem during the 1967 Middle East War. It later annexed the city in 1980, claiming it as the capital of the self-proclaimed Jewish state in a move never recognized by the international community.