The clashes erupted when the Israeli police restricted Palestinians' access to the compound while allowing Jewish settlers to force their way in. 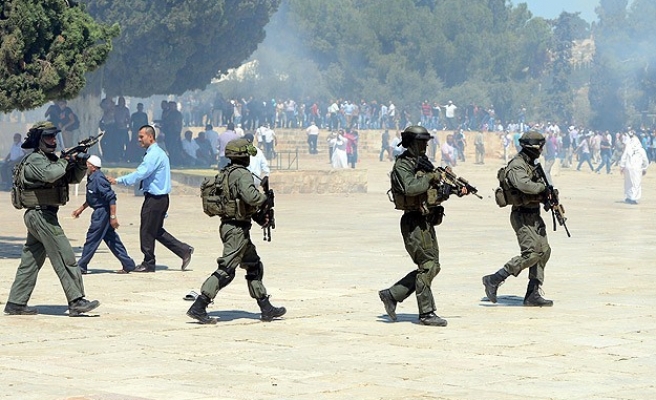 Scores of Palestinians clashed Sunday with the Israeli police at Al-Aqsa Mosque compound in East Jerusalem after the police imposed restrictions on Muslim worshippers' access to the holy site, a Palestinian official said.

"The Israeli police stormed the compound and fired stun grenades and rubber bullets at the Palestinian youths inside the compound, leaving many of them injured," the official working for the Jordanian-run Awqaf authority told Anadolu Agency, requesting anonymity.

According to the official, the clashes erupted when the Israeli police restricted Palestinians' access to the compound while allowing Jewish settlers to force their way in.

Israeli police spokesman Micky Rosenfeld said that two officers were injured when Palestinians hurled stones at the Israeli policemen, prompting the police to close the compound to visitors.

"Police units on Temple Mount arrest 10 Arabs who rioted this morning throwing stones at officers and causing injuries to two of them," Rosenfeld tweeted, using the Jewish name of Al-Aqsa Mosque compound.

Muslims consider Al-Aqsa the world's third holiest site. Jews, for their part, refer to the area as the "Temple Mount," claiming it was the site of two prominent Jewish temples in ancient times.

The violence came as the Israeli army continued pounding the Gaza Strip in an air offensive that left at least 165 Palestinians dead since late Monday.