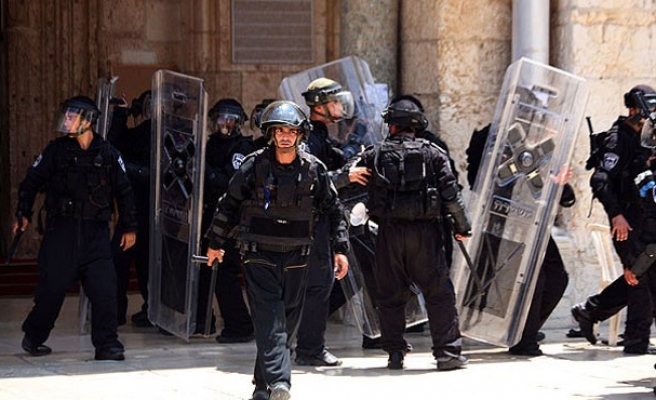 Over 60 Jewish settlers on Wednesday forced their way into the Al-Aqsa Mosque compound in occupied East Jerusalem under the protection of Israeli police after the latter forcibly removed Muslim worshippers from the holy site, a Palestinian official said.

"More settlers are expected to storm the complex after the Israeli police forcibly evacuated Muslim worshippers from the complex," Sheikh Azzam al-Khatib, director-general of the Organization for Muslim Endowments and Al-Aqsa Affairs (run by the Jordanian government), told Anadolu Agency.

Al-Khatib pointed out that the intrusion came on the first day of Jewish Sukkot holiday, describing the move as "an acceptable escalation."

An eyewitness said that the Jewish settlers are taking a tour of the compound's courtyards under protection from the Israeli police after they entered the site through Al-Magharbeh Gate.

A number of Palestinian worshippers suffered teargas inhalation inside the complex after Israeli police fired teargas at their direction through the western Al-Magharbeh Gate, they added.

A stun grenade fired by the Israeli police has nearly caused a fire at Al-Qibali Mosque inside the compound but Palestinian worshippers managed to put out the flames by extinguishers, one eyewitnesses said.

Israeli police spokesman Mikey Rosenfeld said on Twitter that three Israeli police officers have been "lightly" injured in clashes and that Al-Aqsa was open to "visitors," referring to Jewish settlers.

In recent months, groups of extremist Jewish settlers, often accompanied by Israeli security forces, have repeatedly forced their way into the Al-Aqsa complex.

In September 2000, a visit to Al-Aqsa by controversial Israeli leader Ariel Sharon sparked what later became known as the "Second Intifada," a popular uprising against the Israeli occupation in which thousands of Palestinians were killed.