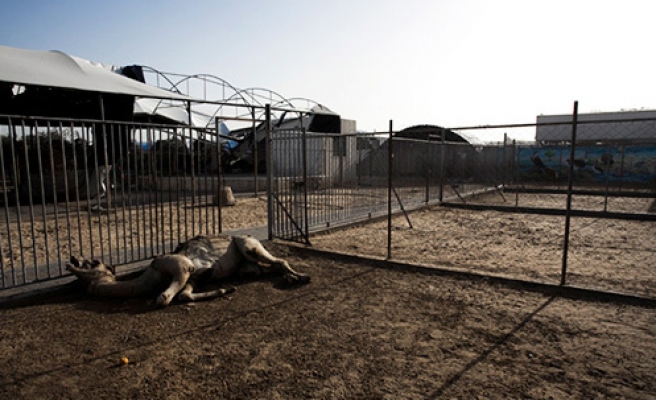 In the Gaza Strip, where residents face a daily struggle to survive, animals at the Khan Yunis zoo are dying every week and the tiger hasn't eaten for days.

Of hundreds of animals bought for the zoo's 2007 opening, the only survivors are the last deer of its herd, a pelican, an ostrich, two porcupines and the tiger -- hungry yet still majestic.

All the other cages are empty and overgrown, while a thick stench lingers in the air. Dusty cats weave in and out of the chipped, green bars of the cages as a puppy howls in its pen.

Now, after years of effort, zoo owner Mohammed Aweda is admitting defeat. He plans to sell the tiger and the rest of the animals and close the zoo after seeing his dreams fail.

The tiger "has not eaten meat for four days," Aweda tells AFP during a visit to the deserted zoo.

When it first opened, families thronged to the 2,000-square-metre Khan Yunis zoo in the south of the Palestinian enclave to see eagles, lions, the tiger, deer, pelicans and even crocodiles for just three shekels.

But between 2008 and 2014, the Gaza Strip, ruled by the Palestinian movement Hamas, has experienced three wars with Israel.

The last conflict, in the summer of 2014, killed 2,251 Gazans, the majority of them civilians, and 73 Israelis, including 67 soldiers, according to the United Nations.

The animals, too, were caught up in Israeli bombing, with 80 killed according to Aweda.

After the conflict "I waited for days before entering and the smell of death was strong. I found carcasses everywhere."

Israel maintains a crippling blockade of the Palestinian enclave and with little in the way of a local economy Gaza's residents simply don't have any money left to spend on going to the zoo.

Inside, a stench emerges from a cage where a barely legible sign tells visitors to respect the cleanliness of the premises.

Dessicated bodies of crocodiles and a lion lie in the sun, surrounded by the bones of other animals.

The weather is fine, but the zoo seems more like an open-air cemetery than a place for joy. Two other zoos in Gaza are in similar states.

School bus driver Tamer al-Nirab says dozens of children used to visit the zoo every day but now "nobody can afford it".

Eighty percent of Gaza's population are reliant on international aid, according to the UN.

At its peak, the zoo had 60 stocked cages, with Aweda and his 13 family members living off the profits.

But now they have taken up other jobs just to try to obtain enough food for the animals.

"Some of my brothers became drivers, others have found employment in small businesses," says Aweda, standing in front of the cage where the 180-kilogramme (400-pound), eight-year-old tiger paces.

To obtain the tiger was a mammoth effort, he says, explaining that it was transported "from Senegal to Egypt, then from Sinai to Gaza through a tunnel."

He is now hoping to sell the beast for $30,000. After that, Aweda says, he will sell the land, and the small zoo of Khan Yunis will be no more.