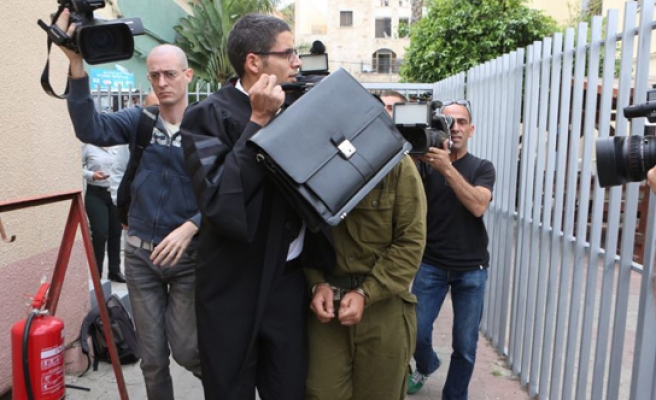 An Israeli soldier caught on video shooting a wounded Palestinian assailant in the head as he lay on the ground is being investigated for manslaughter and not murder, the military said Thursday.

The lawyer for the soldier, who has not yet been charged, welcomed the prosecutors' move.

"The significance from our point of view is that, first of all, the prosecution has climbed down," Ilan Katz told army radio.

"I believe that in a short time that suspicion will also be dropped."

Under Israeli law, manslaughter signifies an intentional but not premeditated killing.

Prosecutors sought to extend the remand in military prison of the soldier, who was arrested after the March 24 shooting.

The court ruled that he should instead be confined to barracks without being locked up but after the prosecution objected, the judge ordered another hearing for Friday.

"Due to this, the soldier will remain in detention until the conclusion of tomorrow's deliberations," an army spokeswoman said in response to an AFP query.

Separately on Thursday, Israel's supreme court ruled the family of the slain Palestinian would be allowed to have a pathologist of their choosing present at his autopsy.

Top military and government officials have strongly condemned the soldier's behaviour, but far-right politicians and protesters have reacted angrily to his arrest and demanded his release.

Israeli Prime Minister Benjamin Netanyahu, a former special forces officer, appeared on Thursday evening to walk a line between backing the military justice system and showing some empathy for the accused, when he spoke to the soldier's father.

"I heard your words and... I understand your distress," Netanyahu's office quoted him as saying in the call, which a statement pointed out was at the request of the family.

"In recent months our soldiers have bravely and resolutely stood up in the face of terrorist attacks and murderers who set out to kill them," Netanyahu said.

"I am convinced that the investigation will be professional and fair toward your son."

The accused soldier's identity and that of his family remain secret under a gag order, granted at the request of his lawyers.

Shot by a Palestinian volunteer for Israeli rights group B'Tselem, it showed a 21-year-old Palestinian, who along with another man had allegedly stabbed a soldier minutes earlier, lying on the ground, apparently after being shot.

The soldier then shoots him again, in the head, without any apparent provocation. The Palestinian, Abdul Fatah al-Sharif, was killed.

The case threatens to exacerbate Israeli-Palestinian tensions amid a wave of violence that began in October.

B'Tselem said on Thursday it had asked the Israeli army and police to ensure the safety of the cameraman, Imad Abu Shamsiyeh, who lives near the site of the incident, adjacent to Jewish settlers.

"Since the footage was released, Abu Shamsiyeh and his family have already been subjected to threats of murder, stones thrown at their home, and hateful posts on Facebook. Most of this violence was instigated by Hebron settlers."

Violence since October has left 200 Palestinians and 28 Israelis dead.

Most of the Palestinians killed were carrying out knife, gun or car-ramming attacks, according to Israeli authorities.

But Israeli forces have also been accused of using excessive force in some cases, charges which they have firmly denied.

A letter from 11 US lawmakers in February that has recently come to light calling on the State Department to look into allegations of possible "extrajudicial killings" by Israel has received widespread attention in the country.

Netanyahu reacted angrily to the letter, saying "where is the concern for the human rights of the many Israelis who've been murdered and maimed by these savage terrorists?"