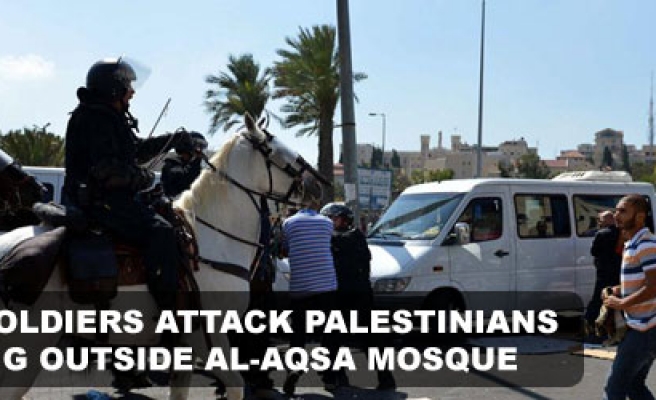 Clashes broke out between Palestinian worshippers and Israeli forces in Al-Quds (occupied East Jerusalem) on Friday.

Israeli police fired stun bombs and tear gas at the worshippers, who responded by hurling stones, the witnesses said.

Israeli forces have banned worshippers under 50 from performing the weekly prayers in Al-Aqsa Mosque.

"A few thousands of elders and women were allowed to perform the prayers because of the siege imposed by Israeli authorities around the mosque," an eyewitness told Anadolu Agency.

Israeli security forces beefed up security measures across Jerusalem on Friday on the eve of the anniversary of the Palestinian Intifada.

Police forces were heavily deployed around Al-Aqsa Mosque and roadblocks were set up in roads across the Old City.

According to Israeli radio, restrictions were imposed on the entry of Palestinian worshippers to Al-Aqsa Mosque, allowing only those above 50 and having Israeli IDs into the worship compound.

The Israeli restrictions come on the eve of the 13th anniversary of the Palestinian Intifada during which thousands of Palestinians were killed and injured after a visit by then opposition leader Ariel Sharon to Al-Aqsa Mosque in 2000.

In recent weeks, groups of Jewish settlers, often accompanied by Israeli security forces, have entered the Aqsa Mosque complex on an almost a daily basis.