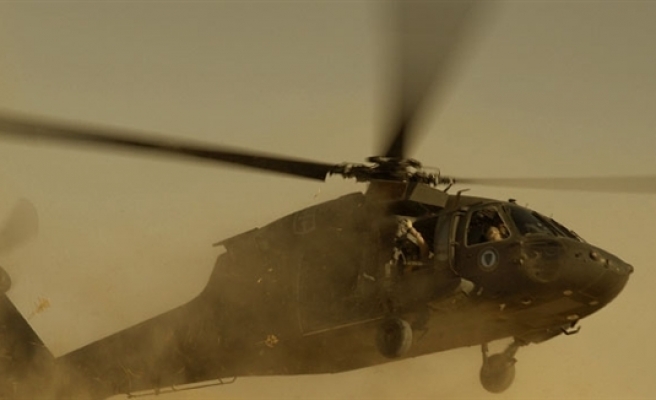 An Israeli helicopter strike in Syria killed a commander from Lebanon's Hezbollah and the son of the group's late military leader Imad Moughniyah, sources close to Hezbollah said, in a major blow that could lead to reprisal attacks.

It comes just days after Hezbollah leader Sayyed Hassan Nasrallah said frequent Israeli strikes in Syria were a major aggression, that the group was stronger than before and that Syria and its allies had the right to respond.

Shi'ite Muslim Hezbollah, which is backed by Iran and fought a 34-day war with Israel in 2006, has been fighting alongside President Bashar al-Assad's forces in Syria's four-year war.

Iran's semi-official Tabnak news site said several of its Revolutionary Guards had also been killed in the attack, without giving further details. State-run Iranian television said the identity of the "martyrs" could not be confirmed.

The Hezbollah-run al-Manar news channel said the Israeli attack suggested "the enemy has gone crazy because of Hezbollah's growing capabilities and it could lead to a costly adventure that will put the Middle East at stake".

Israel's military declined to comment, but an Israeli security source confirmed to Reuters that the Israeli military had carried out the attack.

It was not immediately clear what role Jihad Moughniyah, in his 20s, was playing in the fighting in Syria.

Hezbollah accused Israel in 2008 of assassinating his father, Imad Moughniyah, who was implicated in high-profile attacks on Israeli and Western targets and wanted by the United States. Israel denies any involvement in that killing.

Nabil Boumonsef, a columnist at the Lebanon newspaper an-Nahar, said he believed the strike was a direct response to Nasrallah's speech and could lead to a backlash.

"Killing the son of Moughniyah is dangerous. I do not think that the group can be quiet now, now that the father and the son are killed. I expect that it will do something," he said.

U.N. peacekeepers intensified their patrols on the border between Lebanon and Israel on Sunday night, local sources said.

Imad Moughniyah was implicated in the 1983 bombings of the U.S. Embassy and U.S. Marine and French peacekeeping barracks in Beirut, which killed over 350 people, as well as the 1992 bombing of the Israeli embassy in Buenos Aires and the kidnapping of Westerners in Lebanon in the 1980s.

The United States indicted him for his role in planning and participating in the June 14, 1985, hijacking of a U.S. TWA airliner and the killing of an American passenger.

He was killed in a car bombing in Damascus in 2008.

Jihad Moughniyah appeared in public for the first time a week after his father's death to pledge loyalty to Nasrallah.

"We are with you and we will go wherever you go. We will never leave the battlefield and we will never drop our guns, we answer for you Nasrallah," Jihad, then aged 16, said wearing the group's military uniform in front of thousands of mourners.

Al-Manar television did not mention Moughniyah or the commander but confirmed that a number of fighters were killed when they were checking an area in Quneitra when their convoy came under Israeli missile attack. It said Hezbollah would announce the names of the dead later.

Quneitra has seen heavy fighting between forces loyal to Assad and rebels including fighters linked to al Qaeda. Syrian state television said six people were killed in the attack and a child was wounded, without giving further details.

Israel has struck Syria several times since the start of the war, mostly destroying weaponry such as missiles that Israeli officials said were destined for Hezbollah, Israel's long-time foe in neighbouring Lebanon.

Syria said last month that Israeli jets had bombed areas near Damascus international airport and in the town of Dimas, near the border with Lebanon.

Nasrallah said on Thursday "the frequent attacks on different sites in Syria is a major breach. We consider (those) hostilities (to be) against all the resistance axis."

"(Retaliation) is an open issue," he added.

Iran, Syria, Hezbollah and some Palestinian factions consider themselves an "axis of resistance" against Israel.