Critics say the bill is anti-democratic and legislators from the Arab community, which makes up 20 percent of Israel's population of 8.2 million, have described the bill as racist. 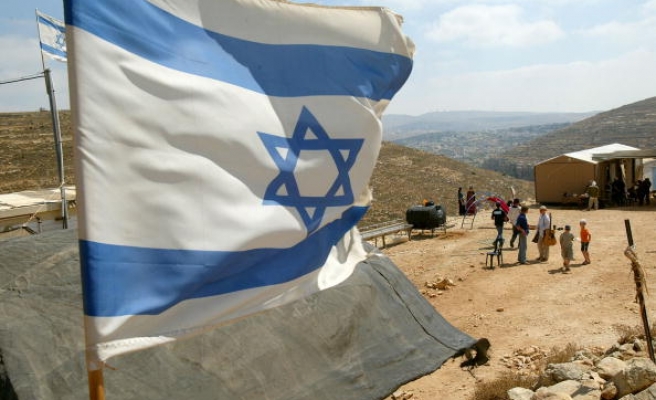 Israel's president has said a bill promoted by Prime Minister Benjamin Netanyahu that would anchor in law the status of Israel as the nation-state of the Jewish people runs counter to its founding fathers' vision of equality for Arab citizens.

"The formulators of the (Israeli) Declaration of Independence, with much wisdom, insisted the Arab communities in Israel, as well as other groups, should not feel as the Jews had felt in exile," President Reuven Rivlin said in a speech on Tuesday.

The 1948 declaration, while proclaiming the creation of a Jewish state, also emphasised its democratic nature and promised "complete equality" of social, religious and cultural rights for all, said Rivlin, whose office is mainly ceremonial.

The new bill won cabinet approval on Sunday, despite the opposition of centrist ministers, but several versions must still be merged and parliamentary ratification is not imminent.

Netanyahu's draft pledges to "uphold the individual rights of all of Israel's citizens". But it also says only the Jewish people have "national rights" - the right to self-determination in Israel and to a flag, an anthem and free immigration.

Critics say the bill is anti-democratic and legislators from the Arab community, which makes up 20 percent of Israel's population of 8.2 million, have described the bill as racist.

On being elected by parliament to the presidency in June, Rivlin, a veteran right-wing politician who has had a rocky relationship with Netanyahu, said he would speak out on domestic issues. He ended his acceptance speech by proclaiming "Long live Israeli democracy".

Many political commentators say Netanyahu's main reason for pushing the bill is to placate hardliners in his right-wing Likud party ahead of an internal leadership ballot in January and a possible early national election next year.

Netanyahu has said the legislation will serve as a counterpoint to anyone "challenging Israel's character as the national state of the Jewish people". Palestinians have said accepting that definition could deny Palestinian refugees of past wars any right of return.

Rivlin's own views on Palestinian self-determination are controversial. He opposes an independent state for Palestinians, backing instead a confederation between them and Israel.

With Netanyahu's 20-month-old, right-wing coalition looking increasingly shaky and talk of early elections growing, all the constituent parties are trying to shore up their base. The threat to Netanyahu comes from nationalist groups on the far-right, and so he has sought to head off their challenge.

He has pushed a highly contentious bill that would establish Israel as the Jewish nation state, legislation critics say puts religion ahead of democracy and marginalises the Arab minority.

He has resumed demolishing the homes of Palestinian suspects, a tactic halted in 2005 after the Israeli army said it was counterproductive.

Netanyahu has also threatened to revoke the residency permit of anyone involved in terrorism. Acting for the first time on the pledge, Israel announced on Wednesday it was cancelling the East Jerusalem permit of the wife of one of the synagogue attackers, who must now return to the West Bank.

When combined with Israel's ongoing construction of settlements on occupied territory and an increasingly abrasive relationship with allies including the United States, the upshot is the most hardline government analysts can recall.

"This is the most right-wing government in Israeli history, much further to the right than the Menachem Begin or Ariel Sharon governments," said Menachem Klein, a professor of Israeli politics at Bar-Ilan University near Tel Aviv.

When there are heightened security fears, as with the Gaza war and the violence in Jerusalem, Israeli society and politics tend to shift quickly to the right. Rather than that being uncomfortable for Netanyahu, it is familiar territory.

"He is originally from the far-right, that is his base. His beliefs, his heart are there," said Klein.

"He assumes early elections are on the horizon and he is competing with (Foreign Minister Avigdor) Lieberman and (Economy Minister Naftali) Bennett for leadership of the far-right," he said, referring to the leaders of the nationalist, pro-settler parties in his coalition.

The rightward shift may have a logic to it, but is likely to have profound, long-term consequences.

The last round of peace talks between Israel and the Palestinians was called off in April, after nine months of largely fruitless discussion. The Palestinians said Israel was not meeting its commitments on settlements and prisoner releases; the Israelis did not like Abbas's reconciliation with Hamas.

In the seven months since, differences have hardened. Almost no one on the Israeli or Palestinian side, or long-term observers of the peace process, sees any near-term prospect of a return to negotiations on a two-state solution.

Instead, unilateralism has ensued.

The Palestinians are pushing for a U.N. statehood resolution. Even if it has little chance of success, it has been encouraged by Sweden's formal recognition and non-binding votes in European parliaments supporting an independent Palestinian state.

On its side, Israel has pushed ahead with settlements in East Jerusalem and the West Bank, territory it has occupied since 1967 and which the Palestinians want for a future state.

In the absence of a two-state solution, Bennett - perhaps the biggest political threat to Netanyahu - is suggesting that Israel annex 60 percent of the West Bank and offer Palestinians citizenship in an enlarged Israel.

Combined with the nation-state bill, which would enshrine certain rights for Jews only, that has alarmed Arabs living in Israel and Palestinians who worry about Israel's long-term territorial goals.

"In terms of the nation-state bill, its effects on the peace process are immense," said Grant Rumley, a Middle East expert at the Washington-based Foundation for Defense of Democracies.

"It solidifies another gap," he said, making it much more difficult to bring the sides back to negotiations.

Klein believes Netanyahu has no genuine interest in a two-state solution. Instead, the Israeli leader hints at Palestinian autonomy in the West Bank, with security remaining in Israel's hands, as would control of the West Bank border with Jordan.

"We are already in one regime," he said, referring to Israeli control of the whole area from the Jordan River to the Mediterranean.

"The government doesn't plan to stop this de facto annexation and the Palestinian Authority has no strategy to stop it."