For more than seven weeks, scores of Palestinian "administrative" detainees have waged a hunger strike to protest their ongoing detention without charge. 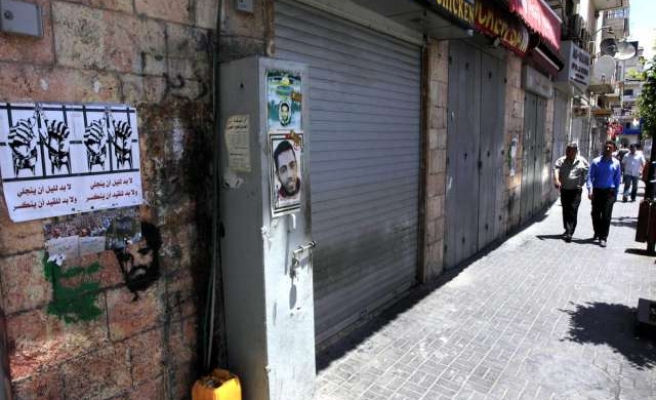 Shops were shuttered in East Jerusalem on Thursday in solidarity with scores of Palestinian prisoners on hunger strike to protest their ongoing detention-without-trial by Israel.

Young Palestinians patrolled the streets of the holy city to ensure that shops were closed.

The strike was organized by all Palestinian factions in East Jerusalem.

Only bakeries and pharmacies remained open in the city, in line with a tradition followed since the second intifada (2000-2005) – one of two major uprisings to erupt against the Israeli occupation.

Ali Hussein, a 31-year-old East Jerusalem baker, said that Palestinians felt the prisoners were "their own brothers."

"I don't think the strike will change anything, but we want to show that we stand firmly with the prisoners in Israeli jails," he told Anadolu Agency.

For more than seven weeks, scores of Palestinian "administrative" detainees have waged a hunger strike to protest their ongoing detention without charge.

They have been joined by scores of other Palestinian prisoners in a show of solidarity.

"Israel arrests people as 'administrative' detainees without any charge and keeps them in prison as long as they like," he told AA.

"They also blow up Palestinian homes after accusing the owners of opposing their policies. The Israelis inherited these two policies from the British," Kaddoura contended.

He asserted that the Palestinians should be much more active in the international arena with a view to defending their rights.

"The only way to stand against [Israeli] aggression is to take more effective initiatives to international bodies like the U.N. and E.U.," he said.

Palestinians plan to stage a protest outside the Red Cross offices in East Jerusalem later Thursday in hopes of drawing international attention to their cause.

Around 5000 Palestinians continue to languish in more than 20 detention facilities throughout Israel, according to a report by the Prisoners Center for Studies and Research, a Palestinian NGO.

Meanwhile, Palestinian activists on Thursday accused Palestinian authorities of preventing them from marching on an Israeli court in the northern West Bank to show solidarity with Palestinian prisoners detained by Israel.

They said Palestinian police had erected barriers on the outskirts of the West Bank city of Jenin to prevent activists from reaching the courthouse, located a couple hundred meters away.

He said the planned march had aimed to send the message that the Palestinian people would continue to stand up for the rights of Palestinian prisoners held by Israel.

The planned march, he added, also aimed to send the message that Palestinians would no longer tolerate the practices of the Israeli occupation.

He went on to warn of an explosion of popular anger if a hunger-striking Palestinian prisoner should die in Israeli custody.