Nine activists from Israel, Britain, Germany and the United States left Famagusta port in northern Cyprus with aid aboard their British-flagged catamaran, "Irene". 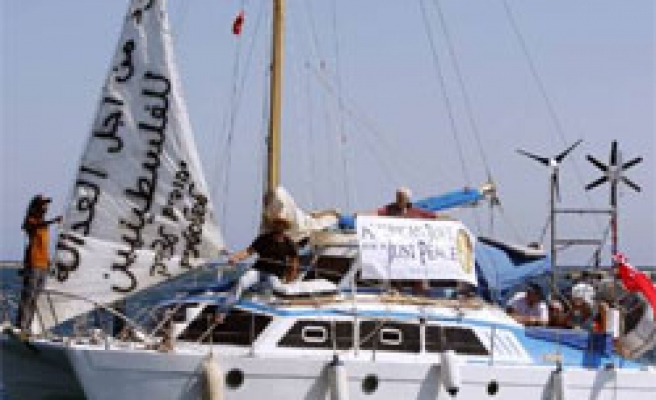 A boat carrying Jewish activists from Israel, Germany, the U.S. and Britain set sail on Sunday for Gaza, to break Israel's siege there and deliver aid.

Richard Kuper, an organizer with the U.K. group Jews for Justice for Palestinians, said one goal is to show that not all Jews support Israeli policies toward Palestinians.

Nine activists from Israel, Britain, Germany and the United States left Famagusta port in northern Cyprus with aid aboard their British-flagged catamaran, "Irene".

If no any Israel attack, their trip to Gaza would take around 24 hours.

"I want to raise my voice against evil and draw attention to 1.5 million people under seige. This is inhuman," said Rami Elhanan, an Israeli peace activist who lost his 14-year-old daughter Smadar to a Palestinian suicide bomber in 1997.

Israel, which killed nine Turkish activists on an aid flotilla on international water on May 31, again called the Irene mission as a "provocation".

Other voyage organizers included the group European Jews for a Just Peace and the U.S.-based Jewish Voice for Peace.

The 33-foot (10-meter) catamaran Irene, carrying a total of nine passengers and crew members, set sail from the Turkish Cypriot north of the island because the Greek Cypriot south imposed a ban on all-Gaza-bound vessels in May, citing "vital interests."

Prior to the ban, international activists had used south Cyprus to launch eight boat trips to Gaza.

"Israel doesn't have moral borders," said Reuven Moskovitz, who at 82, is the oldest member of the group and a Holocaust survivor.

"I'm going because I am a survivor. When I was in a ghetto and almost died I hoped there would be human beings who would show compassion and help."

"The boat's cargo includes symbolic aid in the form of children's toys and musical instruments, textbooks, fishing nets for Gaza's fishing communities and prosthetic limbs for orthopaedic medical care in Gaza's hospitals," said a statement from the organisers, Jews for Justice for Palestinians.

It quoted Richard Kuper, a member of the organising group, as saying that "the Jewish Boat to Gaza is a symbolic act of protest against the Israeli occupation of the Palestinian territories and the siege of Gaza, and a message of solidarity to Palestinians and Israelis who seek peace and justice.

"Israeli government policies are not supported by all Jews." said Kuper. "We call on all governments and people around the world to speak and act against the occupation and the siege."

Last week, a report by the UN Human Rights Council found there was clear evidence to back prosecutions against Israel for killing and torture when its troops stormed the lead ship, the Mavi Marmara.