Vandals wrote anti-Christian messages such as 'Death to the heathen Christians the enemies of Israel' on the walls and doors of a Christian abbey in Jerusalem. 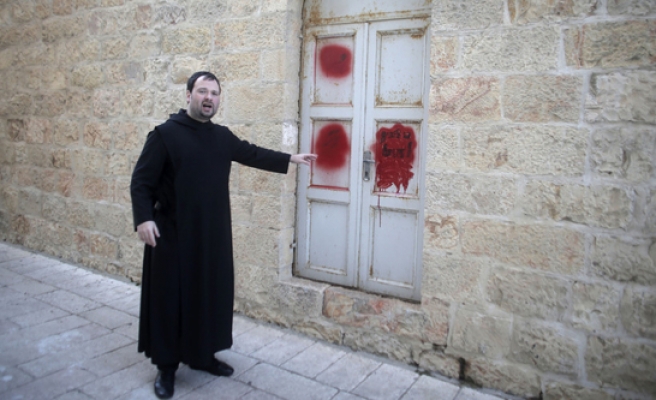 A Christian monastery in Jerusalem has been vandalized with extremist graffiti being daubed on its walls. Messages such as “Christians Go to Hell” were written. Israeli authorities have ordered an urgent police investigation into the crimes committed.

The Hebrw messages on the walls and doors of the monastery included "erase the name and the memory of the bastard," and "death to the heretic Christians, enemies of Israel."

"Idols will be extirpated," a line lifted from the Jewish prayer service, and "Christians Go to Hell" were words that were written with felt-tip pens, Reuters reports. More than one person was responsible as evident due to the different handwriting.

The Dormition Abbey outside of Jerusalem’s Old City walls on Mount Zion was affected by the vandals. Many Christians believe that Jesus held the Last Supper near the site, while it is also believed to be located near to the tomb of the biblical King David.

The vandalism was condemned by the Israeli Internal Security Minister Gilad Erdan, who said that extra police efforts would be put into making sure those responsible were caught for “this despicable act.”

“We will not let anyone undermine religious coexistence in Israel,” he added, as cited by Reuters.

Ayman Odeh, head of of the Joint List, the alliance of Palestinian parties in the Israeli parliament, said that the vandalism amounted to a hate crime, while also saying that the government was partly responsible for ignoring extremism against Arabs.

"Harassment and harming of places that are holy to Islam and Christianity have become almost constant and no one is held accountable," Odeh said, according to the Jerusalem Post.

"In Jerusalem members of the clergy have been harassed for years but lately this phenomenon has become worse, more common, and more violent," he added.