Scores of Jewish settlers, backed by Israeli security forces, stormed the compound of the Aqsa Mosque in Jerusalem on Thursday 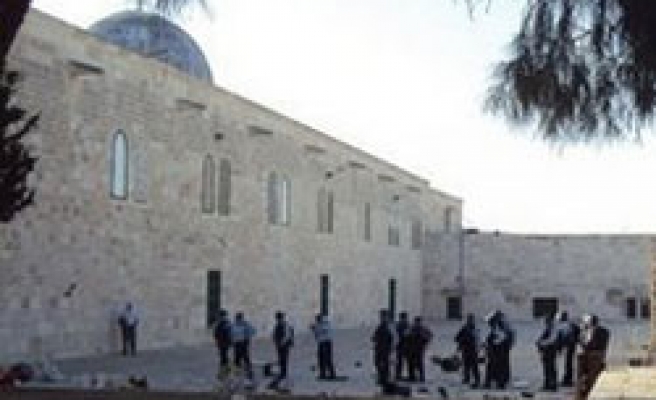 Scores of Jewish settlers, backed by Israeli security forces, stormed the compound of the Aqsa Mosque in Jerusalem on Thursday.

According to eyewitnesses, the settlers performed Jewish prayers at the religious site.

Al-Aqsa Mosque, the Islamic world's third holiest site, has recently been the target of repeated violations by extremist Jewish settlers, distressing Palestinian Muslims who worry that their rights are being threatened.

On Wednesday, Israeli Housing Minister Uri Ariel entered the mosque compound in the company of several policemen and bodyguards, according to a statement from the Aqsa Institute.

Jewish groups have asked Israeli authorities to open the Aqsa compound to Jews on Saturday to commemorate Yom Kippur, or the Day of Atonement, the holiest day of the Jewish calendar.

The Knesset (Israel's parliament) had earlier recommended opening the compound to Jews on all Jewish holidays, according to the Aqsa Institute.

In a related development, Israeli police beat a Palestinian woman near one of the gates of the mosque before tearing off her headscarf, eyewitnesses said.

A group of Palestinian women had arrived at the mosque on Thursday morning, witnesses said, but Israeli police refused to let them in through the Bab al-Nazer gate until they showed their IDs – a demand the women refused to comply with.

The ensuing verbal exchange descended into a physical fight before Israeli policemen beat a 25-year-old woman, witnesses recounted, adding that Israeli police had also beaten one of the mosque's Palestinian guards.

Israeli police had allowed Muslims to enter the iconic mosque starting from 11am, provided they showed their identification cards.