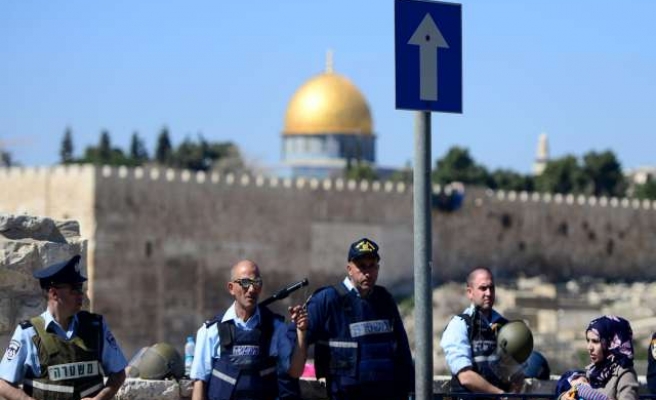 Around 75 extremist Jewish settlers led by radical rabbi Yehuda Glick on Sunday stormed Al-Aqsa Mosque compound under the protection of the Israeli police, a Palestinian guard of the holy complex said.

“The settlers stormed the complex through Al-Magharbeh Gate, passing through the Qibali and Marawani mosques, as well as Al-Rahmeh and Qatanin gates," guard Naser Qous told Anadolu Agency.

“Scuffles between the [Jewish] extremists and Palestinian students took place during the storming,” he added, noting that the setters later left through Al-Rahmeh Gate.

Qous said that Glick, chairman of the so-called Temple Mount Heritage Foundation, shouted "racist chants" against Muslims as he told the Israeli police: "Keep these vandals away!" which lad to scuffles between the settlers and the Muslim worshippers inside the holy compound.

The Al-Aqsa Foundation for Endowment and Heritage, in a statement, denounced the intrusion, saying such acts constitute "a violation of Al-Aqsa Mosque complex that aims to intimidate and scare the Palestinians.”

“The Israeli police also tightened its security procedures on Muslim students within Al-Aqsa Mosque complex,” the foundation, which seeks to safeguard the iconic mosque from Israeli violations, said in its statement.