Under pressure from the demonstrations sweeping the Arab Middle East and protests at home, the monarch in April appointed a panel of elder statesmen to draw up changes to the kingdom's 1952 constitution. 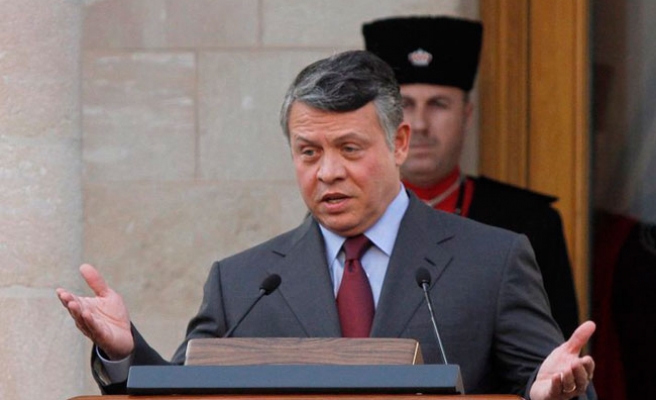 Jordan's King Abdullah said on Sunday proposals for reforms to transfer some of his powers to parliament and enhance civil liberties would pave the way for a prime minister chosen by a parliamentary majority.

Under pressure from the demonstrations sweeping the Arab Middle East and protests at home, the monarch in April appointed a panel of elder statesmen to draw up changes to the kingdom's 1952 constitution.

"These historic constitutional revisions reflect the high level of political maturity among Jordanians," the monarch told the panel during a ceremony in the palace at which he was presented with the document proposing the extensive reforms.

The proposals roll back past alterations to the constitution that have been criticised for sidelining parliament and eroding governments' executive powers, while enabling the security apparatus to grow in influence and personal freedoms to be whittled away.

Ahmad Lozi, who presided over the royal committee, said: "The aim of the comprehensive review we carried out is to render it more responsive to change and to the development of a democratic process."

By empowering parliament, it would pave the way for a prime minister to emerge from a parliamentary majority rather than be handpicked by the monarch.

The monarch said the changes, expected to be approved by parliament within a month, would help in developing an "institutionalised political process that respected rotation of power through parliamentary governments".

Diplomats say the changes do not tackle the role of the powerful intelligence apparatus, which has a pervasive influence in public life.

Political commentators say as long as the electoral system fails to address discrimination against citizens of Palestinian origin, who are grossly underrepresented in parliament and the state, real change has a long way to go.

"The reforms cannot be complete unless they enhance the participation of all Jordanians on equal footing and treat them as individuals, not as belonging to groups, whether political or tribal," said Labib Kamhawi, a prominent Jordanian analyst.

The palace has so far managed to contain growing discontent from the tribes, who dominate parliament under an electoral system that favours sparsely-populated tribal regions and forms the backbone of support for the monarchy.

Aides say the monarch, who has ruled since 1999, has been forced to take only cautious steps towards democracy, constrained by the tribal power base which sees reforms as a threat to its political and economic benefits.

King Abdullah has said his reformist agenda has been frustrated by conservative politicians who hold extensive power within the security establishment.

The text of the reform proposals, seen by Reuters, shows the changes will curb the monarch's power to indefinitely postpone elections -- with a four-month deadline to call polls after the monarch dissolves parliament.

A powerful intelligence apparatus has in the past decade influenced the monarch to postpone elections for up to two years at a time of regional upheaval, palace insiders say.

"The weakness of governments and decision-makers has allowed the security forces to take over and control all aspects of political and civil life," said Zaki Bani Rusheid, a leading Islamist politician.

The reforms would curb governments' ability to enact laws in the absence of a legislature. Past governments have introduced measures placing tough restrictions on public freedoms during such periods.