Netanyahu said Israel was committed to preserving the current situation at holy sites in East Jerusalem, the Jordanian royal court said in a statement 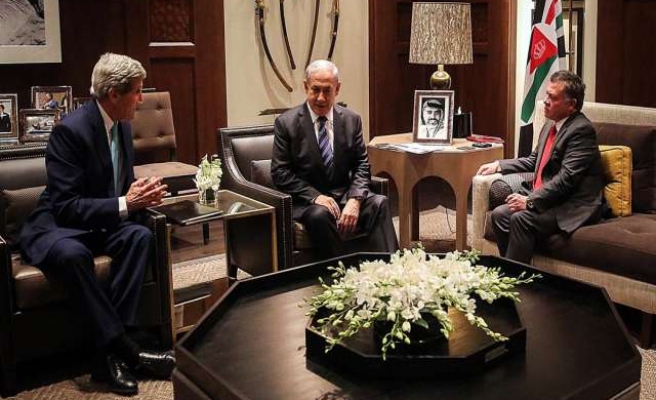 Netanyahu said Israel was committed to preserving the current situation at holy sites in East Jerusalem, the Jordanian royal court said in a statement.

It added that the King also called for practical Israeli measures to preserve the current situation in Jerusalem, especially in Al-Aqsa Mosque.

Egyptian President Abdel-Fattah al-Sisi had received a phone call from Jordanian King Abdullah II during the meeting in Amman, the Egyptian presidency said.

The Jordanian King had briefed the President about the consultations he made with Netanyahu and Kerry, presidential spokesman Alaa Youssef said in a statement on Thursday.

He added that al-Sisi had underlined the importance of reaching a final settlement for the Palestinian-Israeli conflict within the framework of the two-state solution, which leads to the establishment of a Palestinian state with East Jerusalem as its capital.

Earlier this month, Jordan – which is responsible for Jerusalem's holy sites in line with a 1994 peace treaty with Israel – recalled its ambassador in Tel Aviv to protest Israeli "violations" in East Jerusalem.