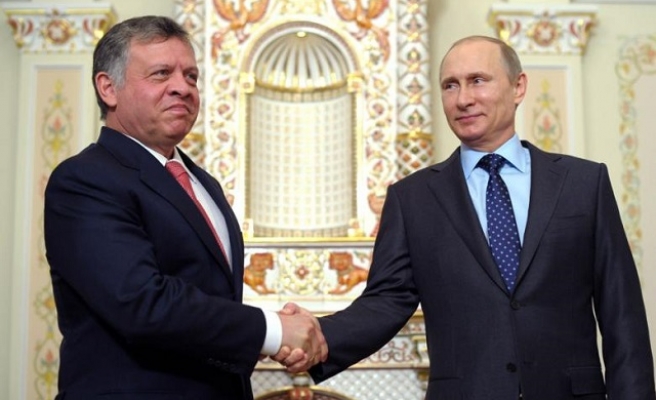 King Abdullah of Jordan praised Russian President Vladimir Putin on Tuesday Moscow over a vital role his country is playing to bring together rival sides in Syria to seek a solution to a war that has killed a quarter of a million people.

The two were meeting amid a renewed diplomatic push on the conflict in Syria, where fighting has intensified and where ISIL now controls vast territory.

"We need to find a solution on Syria. Your role and the role of your country is vital in bringing together all the rival sides to a negotiating table towards a peace solution," the king told Putin while visiting Moscow.

Russia has been a key backer of Syrian President Bashar al-Assad in the conflict, which started with street protests against his rule in March 2011. Iran has also thrown its weight behind Damascus.

But the United States and its regional allies, including Saudi Arabia, want Assad to go and support armed opposition groups seeking to oust him.

Jordan, a U.S. and Saudi ally, has supported an alliance of rebels seen as moderate by Assad's Western foes. They are now fighting in southern Syria, battling the Syrian military and allied militia for full control of the city of Deraa near the border with Jordan.

Putin also discussed Syria with the Abu Dhabi Crown Prince Sheikh Mohammed bin Zayed al-Nahyan on Tuesday as the two met on the sidelines of Russia's largest air show that opened just outside of Moscow on Tuesday.

On Wednesday, the Russian leader will receive Egypt's junta President Abdel Fattah al-Sisi in Moscow in the latest high-level diplomatic contacts over Syria.

United Arab Emirates, Jordan and Egypt have close security ties with Washington, though they have come under some strain following the Arab Spring revolts in the Middle East and North Africa.

Putin and Sisi will also discuss bilateral cooperation, including plans for Russia to build a nuclear power station in Egypt, the Kremlin said in a statement.