Khamenei says not opposed to extension of nuclear talks

Khamenei, the ultimate authority on all Iranian matters of state, said: "For the same reasons I wasn't against negotiations, I'm also not against the extension 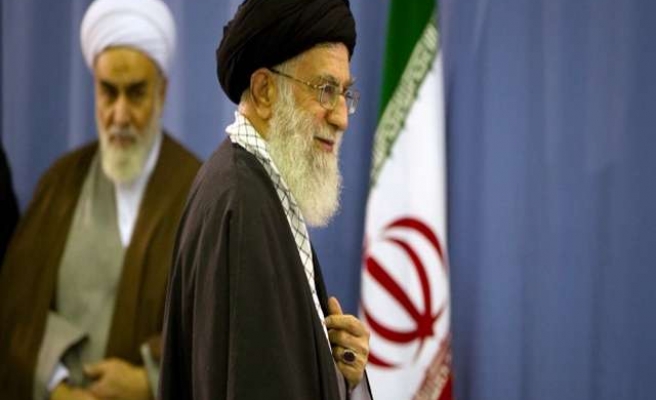 Iran's supreme leader made clear on Thursday he backed extended nuclear talks with world powers, shoring up Tehran's negotiating team against attacks by his hardline acolytes for failing to secure a deal that could have meant major relief from sanctions.

Ayatollah Ali Khamenei also said that if the talks, extended on Monday for seven months beyond the Nov. 24 deadline, ultimately failed, "the sky won't fall to the ground" and that the United States would be the biggest loser if that transpired.

With the two sides having missed a deadline to overcome their differences for the second time this year, Iranians face the prospect of at least several more months of international sanctions that have hammered their standard of living.

But Khamenei, the ultimate authority on all Iranian matters of state, said on his website: "For the same reasons I wasn't against negotiations, I'm also not against the extension."

He added that Tehran's negotiators were "hard-working and serious ... (They) justly and honestly stood against words of force and bullying of the other side, and unlike the other side, they did not change their words every day."

Conservative hardliners remain wary of striking any compromise with the West under moderate President Hassan Rouhani's push for a nuclear deal but also demand explanations about why a year of talks yielded no substantive result.

In another comment issued on his Twitter account, Khamenei said: "We accept fair and reasonable agreements. Where there's bullying and excessive demands, all of Iran, people and officials, will not accept."

The two sides remain far apart on central issues including permissible enrichment capacity in Iran, the length of any final settlement and the pace at which financial sanctions imposed over Tehran's suspected atom bomb ambitions would be dismantled.

Iran denies any aim to develop nuclear weapons capability, saying it is refining uranium only for peaceful energy.

Khamenei also said the security of Israel, Tehran's arch-foe, would decline over time. "Know that whether or not we reach a nuclear agreement, Israel becomes more insecure day by day," he said, without elaborating.

Israel, the only Middle East state with a presumed nuclear arsenal, regards Iran's nuclear agenda as a potential mortal threat and is dismissive of the talks, suggesting Tehran is only trying to buy time to become a threshold nuclear power.

The Jewish state has hinted at pre-emptive strikes on Iran's nuclear installations if it deems diplomacy ultimately futile.