A group claimed the responsibility for abduction of two Turkish pilots and demanded that nine Lebanese people taken hostage in Syria be released in exchange for Turkish pilots. 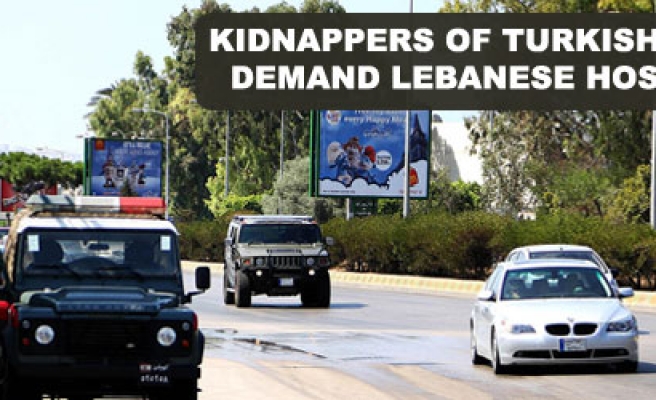 A group named "Visitors of Imam Reza" claimed the responsibility for Friday's abduction of two Turkish pilots in capital Beirut.

Every type of effort has been made to save Turkish pilots, said Turkish Foreign Minister Ahmet Davutoglu on his twitter account.

"News that came from Beirut in the early morning (Friday) overshadowed the happiness of Eid al-Fitr," Davutoglu said adding all attempts were made concerning the incident.

Turkish embassy is in contact with Lebanese authorities from the very beginning of the event, he said.

"I spoke to Lebanese Prime Minister Najib Miqati and Parliament Speaker Nabih Berri over the incident," Davutoglu noted, "We make all efforts to bring back the pilots safe and sound."

Referring to Friday's abduction of two Turkish pilots in Beirut, Turkish President Abdullah Gul said, "Contacts have been made immediately after the incident on which we have some predictions. I will also talk to Lebanese President. I hope the pilots will soon arrive home safe and sound."

A shuttle including the pilot, the assistant pilot, and the crew of the Turkish Airlines plane which flew to Beirut from Istanbul was stopped by four gunmen on the way from airport to the hotel, Turkey's ambassador in Beirut Inan Ozyildiz told Anadolu Agency.

Last year in May, 11 Lebanese were kidnapped on their way to return back to their country after visiting the tomb of Imam Ali Reza in Iran. Two out of 11 were later released with Turkey's mediation.

Meanwhile, families of abducted Lebanese people in Azaz town of Syria rejoiced at the news of Turkish pilots abduction in Beirut.