The bombing of a mosque in June killed 27 people. 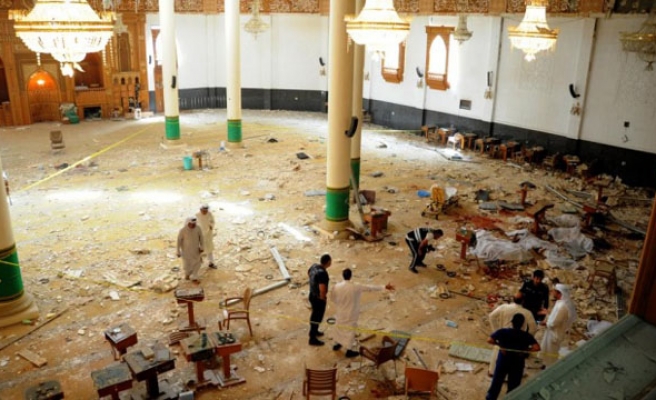 A Kuwaiti court sentenced seven men to death on Tuesday, five of them in absentia, for their roles in a deadly Shiite mosque bombing claimed by the ISIL group.

A total of 29 defendants, seven of them women, had been on trial on charges of helping a Saudi suicide bomber carry out the June 26 attack, which killed 26 Shiite worshippers and wounded 227.

"The court draws attention to the dangers of this extremist ideology that resorts to terrorism for its implementation," judge Mohammad al-Duaij said before reading out the verdicts in a packed courtroom.

Among those he sentenced to death was Abdulrahman Sabah Saud, a stateless Arab convicted of driving the bomber to the mosque and bringing the explosives belt he used from near the Saudi border.

During the trial, Saudi confessed to dropping off the bomber but said he had been assured that the plan was to blow up the mosque without harming any worshippers.

The second man in the dock who was sentenced to death was Fahad Farraj Muhareb, described by the court as the "wali" or leader of the local branch of ISIL.

The other five, who remain at large, include two Saudi brothers, Mohammad and Majed al-Zahrani, who were convicted of smuggling the explosives used in the attack from Saudi Arabia in an icebox.

The two men were arrested by Saudi authorities days after the attack.

The other three include two stateless Arabs who were convicted of fighting with ISIL as well as one defendant whose identity has not been established.

The court sentenced eight people, including five women, to jail terms ranging from two to 15 years for providing weapons training, abetting the attack, or knowing about it and failing to inform authorities.

The court acquitted 14 defendants, including two women. Eleven of them had been released during the trial.

Among those acquitted was Jarrah Nimer, the owner of the car which was used to drop off the bomber.

There was tight security for the hearing with armoured vehicles deployed outside the Kuwait City court complex and helicopters patrolling overhead.

Twenty-four defendants were in court to hear the verdicts. Men were put in a metal cage, while women were allowed to sit on chairs watched over by a large number of police.

Including those still at large, those tried comprised seven Kuwaitis, five Saudis, three Pakistanis and 13 stateless Arabs, as well as the unidentified fugitive.

An ISIL-affiliated group calling itself Najd Province claimed the Kuwait City bombing as well as suicide attacks at two Shiite mosques in Saudi Arabia in May.

The Sunni extremists of ISIL consider Shiites to be heretics and have repeatedly attacked Shiite targets around the region.