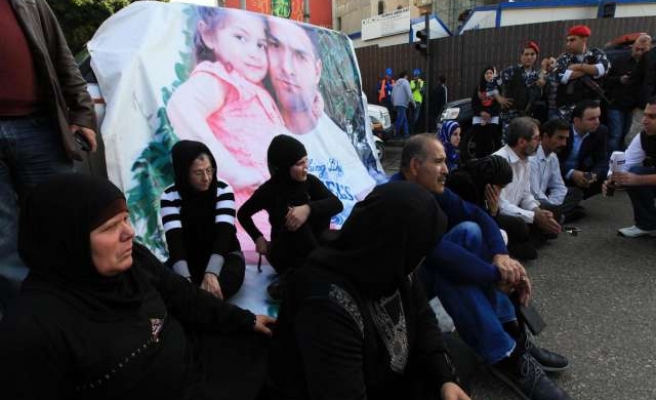 Families of Lebanese soldiers held by militants blocked roads in Beirut and highways between major cities on Saturday, pressing the government to do more to free them.

More than two dozen members of the Lebanese security forces are being held by militants. One leading militant, Abu Ali al-Shishani, has pledged to attack Lebanese women and children and end talks to free the soldiers, after his wife was detained by authorities.

The threat, delivered in a video distributed on websites, was published on Friday hours before the group said it had killed one of the Lebanese soldiers it holds.

Lebanese authorities earlier this week said they had detained a wife of ISIL leader Abu Bakr al-Baghdadi. The wife of Shishani has also been arrested.

Officials say Shishani is a fighter in the Nusra Front, al Qaeda's official Syrian wing. But in the video he praises Baghdadi. ISIL and Nusra have both clashed and worked closely with each other at different times.

The women were apparently viewed by some Lebanese security elements as a possible bargaining chip with the militants to gain the release of the captive soldiers.

Sitting in front of a black flag with two militants by his side, Shishani said Shi'ite Muslim women and children and families of Lebanese soldiers were now legitimate targets.

"My wife, Ola Mithqal al Oqaily ... was taken two days ago from Tripoli, the city that is called the city of Islam and Muslims," Shishani said.

"If my wife is not released soon, do not dare to dream about the release of the soldiers without negotiations.

"All your wives, children and men are legitimate targets now," he said, using the phrase "slaves of (late Iranian leader Ayatollah Ruhollah) Khomeini" to refer to Shi'ites.

Many Sunni Syrian rebels and Lebanese Sunni groups accuse Lebanon's army of working with the Lebanese Shi'ite movement Hezbollah which has sent fighters to aid Syrian President Bashar al-Assad, a member of the Shi'ite-derived Alawite minority.