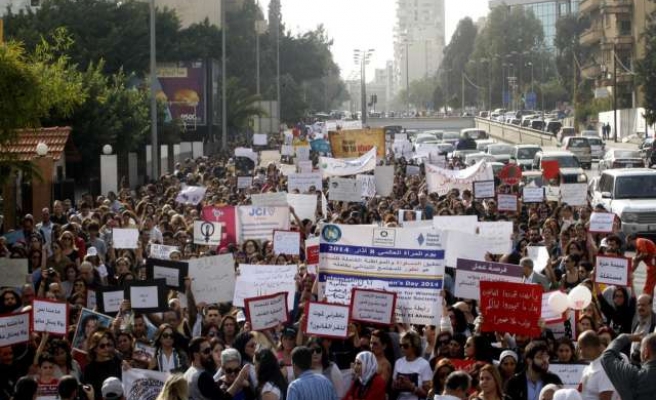 Thousands of Lebanese marked the International Women's Day on Saturday with a protest in the capital Beirut against domestic abuse, citing recent cases of women killed by family members.

The protest was championed by Kafa (Enough), a civil society organization focused on human rights.

It drew nearly 4,000 people who marched from Beirut Museum to the Justice Palace.

The crowd was an incremental increase from the usual International Women’s Day activities, which KAFA media coordinator Maya Ammar attributed to recent cases of women being beaten to death by family members.

In February, Manal al-Assi and Margaret Tannous, a Lebanese national living in Australia, were reportedly beaten to death by their husbands while Christelle Abu-Shaqra was poisoned.

"We need to pressure parliament to protect women from family violence and to demand justice for women," Ammar told AA.

The parliament is currently debating a bill, tabled since 2010, which would make domestic abuse a criminal offence.

A parliamentary committee has approved the bill but it has not been put to vote yet.

In a statement, he said the bill "was not introduced to improve women’s status, but rather to break up the family similar to Western ways, which are foreign to our society and values."

Naim Qassem, the deputy leader of the Shiite group Hezbollah, has also spoken out against the bill.

"We are against domestic violence. We do not accept harming women, and we affirm their rights, which were given to them by Islam in all areas," he said back in 2011.

"But we don't approve of fragmenting the family with complaints that open the door for courts to interfere in any small or trivial dispute."

According to Saghieh, the Lebanese judiciary system does not take the murder of women seriously.

"Women's rights need to be given more consideration by judges and the judicial system."

Saghieh cites the famous case of Roula Yaacoub, a woman who died on her way to the hospital in July 2013.

Neighbors and family members claim Yaacoub’s husband regularly beat her and blame him for her death.

A report disputed by the family said there was insufficient evidence that Yaacoub was beaten to death, allowing her husband to go free.

Her mother, Leila, took part in Saturday's protest. Before the march, she stood silently in all black.

Protesters chanted at one point during the march that lawmakers would see visions of the dead women in their dreams if they fail to take action against domestic abuse.

But the bill faces major opposition in parliament.

Religiously conservative MPs oppose the bill on the ground that cases of domestic abuse should be handled according to the family's religious beliefs.

More progressive legislators oppose the bill, insisting that a domestic violence law should not only protect women, but men as well.

The bill has been amended to exclude the issue of marital rape, an issue also highlighted by the protesters.

The current rape law criminalizes "whoever forces anyone other than his wife to have intercourse."

"These laws need to be ratified so that women in Lebanon can be equal," Ziad Naamani, a legal consultant, told AA.

"We need to work on these laws."

Ammar, for her part, insists this is not the issue.

"A crime is still a crime," she said. "Just because it's hard to prove doesn't mean we shouldn't consider it a crime."

Naamani, who joined the Saturday march, said he was taking part in the protest for his family and friends.

"I am personally here because I respect women. I have sisters and a mother and female friends," he said.

"And I'm here for my future daughter."