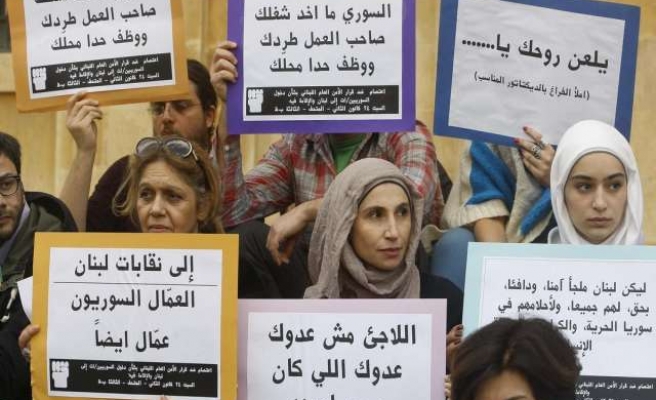 Dozens of Lebanese activists organized a protest in Lebanese capital Beirut on Saturday against what they described as recent "unfair practices" by the Lebanese government against Syrian refugees.

During the protest, which was staged outside the National Security headquarters in Beirut, the activists denounced the harassment of displaced Syrian nationals.

They accused the Lebanese regime of being "complicit" in the war now being waged by the Syrian regime against the Syrian people.

"The people of Syria have been suffering for four years now as the Syrian regime continues to wage war against them with assistance from allies in all countries," civil society activist, Nidal Ayoub, told The Anadolu Agency.

She accused Lebanon of being one of these allies.

"Barring Syrians from entering Lebanon without a visa is both humiliating and discriminatory," Ayoub said in a statement, describing visa procedures as "extremely difficult."

Ayoub said the ministries of education and public works also harassed Syrian students and workers under a variety of pretexts.

She described the deportation of Syrian refugees, the cancellation of their refugee status and arbitrary arrests as a "continuation of the war the Syrians fled their country to escape."

Earlier this month, Lebanese authorities made it necessary for Syrians who want to enter Lebanon to obtain a visa.