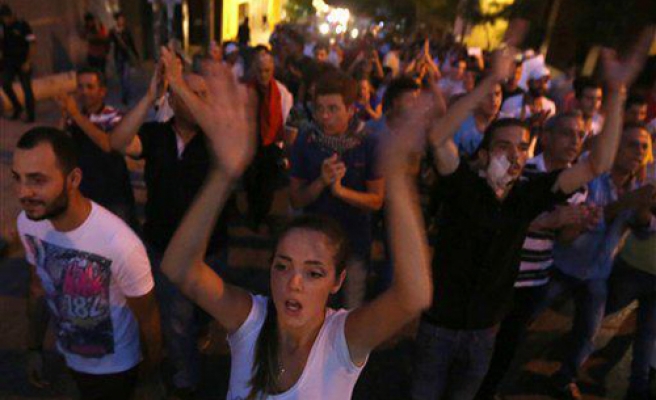 Lebanon braced Saturday for its largest anti-government protest organised by a civil society frustrated with a political class they see as corrupt and incapable of providing basic services.

The protest kicks off at 6:00 pm (1500 GMT) at Beirut's iconic Martyrs Square after weekend demonstrations descended into violence with some protesters clashing with police.

"Today, we're expecting more than 50,000 protesters," said Assaad Thebian of the "You Stink" which is stressing the non-partisan nature of the demonstration.

"This is not a protest for political parties. It is for all the Lebanese people... We are against the parties that are exploiting citizens," said fellow organiser Lucien Bourjeily.

The "You Stink" campaign began in response to a trash crisis that started with the closure of Lebanon's largest landfill in mid-July resulting in garbage piling up on the streets of Beirut and beyond.

Since then there have been small protest with have broadened to include demands for a political overhaul of government institutions seen as corrupt and ineffective by many Lebanese.

Organisers have said they would call at Saturday's demonstration for new parliamentary elections and for the resignation of the environment minister.

"This mobilisation we see today is different. It is not politicised, it is not linked to any political movement," said Jad Chaaban, a professor of economics at the American University of Beirut.

"This is important -- the movement was able to unite people who are disgusted by politicians."

Lebanon's parliament has twice extended its mandate since 2009,and has been unable to elect a president since May 2014. Political deadlock has likewise paralysed the cabinet.

The country suffers chronic electricity and water shortages, further strained by the influx of more than one million Syrian refugees.

These frustrations have sparked slogans targeting Lebanon's political class, including "You stink," "We want accountability," and "All of them, means all of them" -- meaning no political leader would be exempt from public anger.

Last weekend, thousands gathered to vent their anger with protesters calling for "the fall of the regime".

But violence broke out on Saturday and Sunday, with the campaign blaming "troublemakers" for the unrest which saw some protesters throw bottles and fireworks at security forces.

To try to avoid similar unrest, authorities and the campaigns have taken a number of measures.

The Lebanese army and police will run a "joint operations room" to "guarantee the well-being of protesters" during Saturday's protest, said Beirut governor Ziad Chebib.

The army also deployed troops around Martyrs Square while policemen were manning position inside the square, a defence official told AFP.

"You Stink" has also mobilised 500 volunteers who would coordinate with security forces to try and prevent outbreaks of violence, Thebian told AFP.

The protest movement has won support actors, singers and other artists, and has been given wide coverage from local television stations and on social networks.

Many see it as a clear change from rallies which are usually organised by political parties to push a cause in Lebanon, a country divided by deep-rooted political rivalries.

"In the past, political leaders would organise protests. But today, all communities are participating because everyone is being affected" by the trash crisis, said prominent Lebanese singer Ghassan Saliba.

Chaaban said the failure by Lebanon's politicians to find a solution to the crisis has highlighted corruption in the country and further sparked the anger of the citizens.

Thebian urged the Lebanese people to flood the streets and make their voice heard.

"None of us have electricity or water. Take to the streets for yourself, for your children, for your country."

"You shouldn't think twice about this," he said.