The U.N.-backed Lebanon tribunal released on Friday the names, photographs and details of four men wanted for the assassination of statesman Rafik al-Hariri in a bid to speed up their arrest. 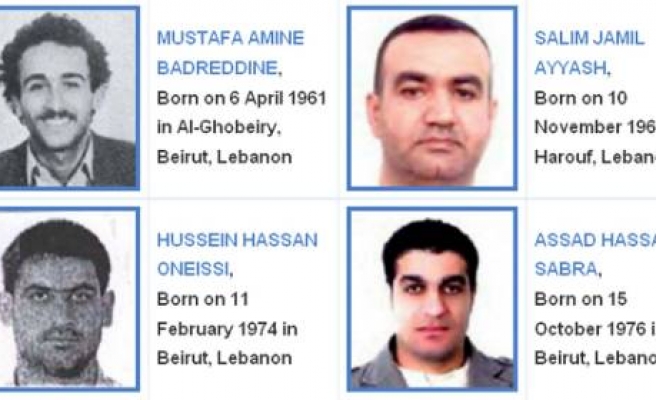 The U.N.-backed Lebanon tribunal released on Friday the names, photographs and details of four men wanted for the assassination of statesman Rafik al-Hariri in a bid to speed up their arrest.

Lebanon received the indictments and four arrest warrants from the Special Tribunal for Lebanon (STL) last month. While the suspects were not named then, Lebanese officials said the accused were some members of the Hezbollah.

Hezbollah accuses the tribunal of being a tool of the United States and Israel and denies any link to the 2005 assassination. There was no immediate reaction from Hezbollah.

Earlier this month, Hezbollah leader Sayyed Hassan Nasrallah said the authorities would never arrest members of the group. He dismissed the accusations as unfounded and a failed attempt to sow strife and bring down Lebanon's new Hezbollah-backed government.

Under the court proceedings, Lebanese officials have 30 days to make arrests after receiving indictments.

Hezbollah, both a Shi'ite political movement and guerrilla army, said it had nothing to do with the huge explosion on the Beirut seafront which killed Hariri, a Sunni Muslim who served several terms as prime minister, and 22 others in February 2005.

Pre-trial judge Daniel Fransen ordered the lifting of confidentiality on the full names, aliases, biographical information, photographs and charges against the individuals named in the indictment, the tribunal said in a statement.

"The Prosecutor further submits that making the requested information available in public fora may increase the likelihood of apprehending the accused in the event that any of them are noticed by the public," the tribunal said in a statement.

Hariri's assassination plunged Lebanon into a series of political crises, killings and bombings that led to sectarian clashes in May 2008, dragging the country back to the brink of civil war.