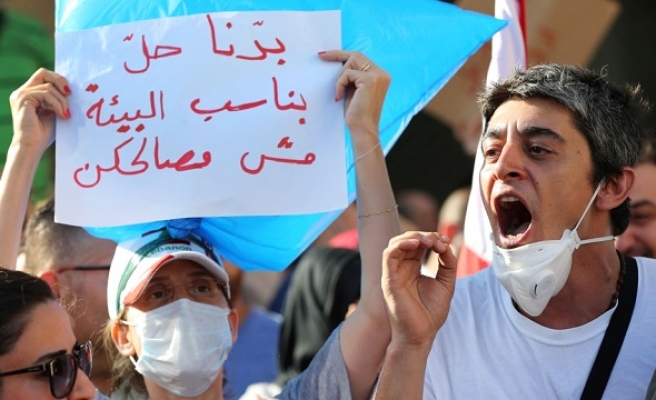 Lebanon's cabinet held an emergency meeting on Tuesday in its newly fortified headquarters after protests over trash collection spilled over into street violence and calls for the feuding government to resign.

Beirut-based activists from the "You Stink" campaign held two large rallies over the weekend and a smaller march on Monday over uncollected rubbish, reflecting long-simmering anger about government incompetence and political corruption.

Protest organizers have called on Lebanese at home and abroad to join them in a large rally on Saturday.

Ministers arrived in cars at the heavily guarded Serail Palace on Tuesday and began their meeting. Workers erected concrete blast walls around the building on Monday, which protesters quickly covered with colorful anti-government graffiti.

The protests that initially started peacefully over the weekend descended into violence after clashes between police and protesters that wounded scores.

Lebanon's army commander General Jean Kahwaji said late on Monday the armed forces would protect any peaceful demonstrations but would not tolerate "security violators or infiltrators" who sought to sow "sedition and chaos."

Protest organizers have blamed the violence on troublemakers whom they say are connected to rival sectarian parties. The U.N. special coordinator for Lebanon on Monday urged "maximum restraint" by all sides.

The protest campaign, which has mobilized independently of the big sectarian parties that dominate Lebanese politics, blames political feuding and corruption for the failure to resolve a crisis that has left piles of uncollected garbage stinking in the scorching sun in recent weeks.

The cabinet and parliament are deadlocked, politicians have been unable to agree on a new president for more than a year while Syria's war next door has aggravated sectarian tensions and driven more than one million refugees into the country.

Behind the deadlock is the power struggle between the two political blocs who are divided over Syria - the Iranian-backed Hezbollah and its allies including Christian politician Michel Aoun, and the Saudi-backed mainly Sunni pro-Western Future Movement led by politician Saad al-Hariri and his allies.

The Salam cabinet, formed last year with the blessing of regional rivals Saudi Arabia and Iran, has avoided a complete vacuum in the executive arm. It brings together Hariri's Future movement, Shi'ite Hezbollah and Christians.

But it has struggled to take even basic decisions and tension in cabinet has escalated over appointments in the security agencies and army.

The trash crisis began last month when the main refuse tip for Beirut was closed, with no ready alternative. While collection has resumed in some areas, no lasting solution has been found.