Nine Lebanese soldiers held by the ISIL have appeared in a new video, appealing to their government to intervene and meet the demands of the group or they will be beheaded within three days. 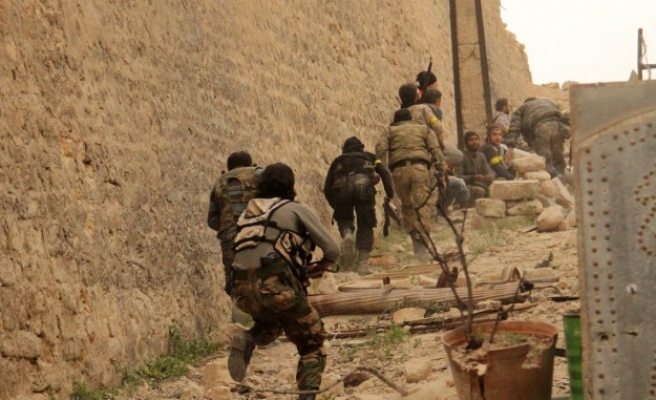 ISIL militants beheaded a Lebanese soldier who was one of 19 captured when they seized a Lebanese border town for few days this month, a video posted on social media showed on Saturday.

The soldier, recognisable as Ali al-Sayyed, a Sunni Muslim from north Lebanon, was shown blindfolded with his hands tied behind his back, writhing and kicking the dusty ground while a militant announces he will be killed. Another militant then beheads him.

The Lebanese army declined to comment but security and ISIL sources confirmed the latest beheading.

Families from the predominantly Shiite eastern Lebanese village of Labweh on Saturday blocked an international road in the village to protest what they described as the government's inaction on the kidnapping of troops by militants from the ISIL (now called Islamic State or IS).

"They [the government] should realize that our action will not stop at protests," the woman said. "We have men and money and whatever it takes for us to put the necessary pressure," she added.

The protest of the families of the village comes only hours after the kidnappers posted a video in which nine Lebanese troops implored their families to put pressure on the government to take measures to guarantee their release.

A senior IS leader in Al-Qalamoun area on the border between Syria and Lebanon told Anadolu Agency, on the condition of anonymity, that the nine individuals who appeared in the video were all army troops.

"The prisoners are all army troops. They were originally eleven before one was killed on Thursday while another was not featured in the video but he is alive and in good health," the source said.

The captured soldiers were abducted by gunmen – said to be IS militants – during clashes earlier this month in Arsal, a Lebanese town on the Syrian border.

In the video, a soldier who identified himself as Hussien Ammar from Akkar called on residents of his village to block roads to pressure the government to release the detainees from Roumieh prison within three days or the captured soldiers would be "immediately slaughtered."

Another soldier, Mohamed Hussein from Western Beqaa, made a same request, while two other soldiers accused the Lebanese government of neglecting their ordeal since their capture earlier this month.

Abbas Madlaj, a Shiite, called on coreligionists to "intervene" or "we would be doomed to beheading."

Other soldiers made similar appeals to their families to intervene and exert pressure on the government to meet the group's demand for the release of Islamist detainees.

The Lebanese authorities are yet to comment on the video.

An Anadolu Agency reporter in the area said the Syrian military planes had targeted concentrations of militants in the area.

The reporter added that some of the injured victims of the strikes were immediately taken to a field hospital in the town for treatment.

There have been no official comments from either the Syrian government or the Lebanese government on the strikes.

Fierce clashes erupted earlier this month in Arsal between the Lebanese army and militant groups affiliated with the Syrian opposition.

More than 106,000 Syrians have fled the violence back in their country and arrived in Arsal to live with its original 30,000 Lebanese residents.