Life amid snipers, missiles and explosives in Aleppo

To have a chance of survival, the people of Aleppo have become habituated to living in the face of death. Bombardments, artillery fire and snipers all seem to have become commonplace. 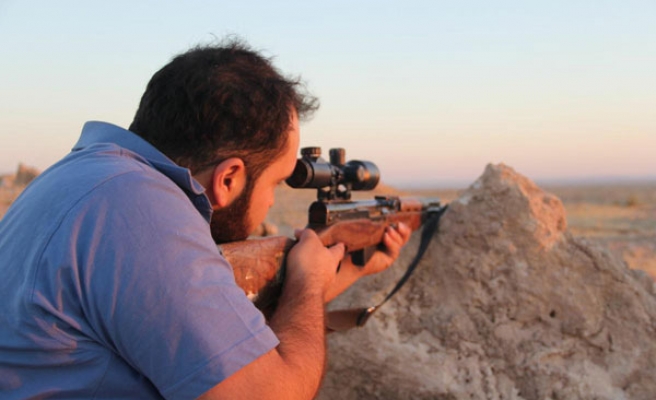 One of the most memorable objects from the Bosnian war two decades ago was the sign that said "Pazi Snajper" (Watch out, sniper). Hundreds of Bosnians were killed by snipers up in hidden posts around Sarajevo.

Dozens of people collapsed in streets, shot dead silently. It was the "sniper death," which struck suddenly, coming out of nowhere. Not long into the war, Serbian sharpshooters captured several moments of shooting and sold them to TV channels. That's how the world learned how a sniper kills.

Sarajevo streets were decorated with banners, flags, and sometimes even sheets and blankets to block snipers' view. Every street had the same sign that left an indelible mark in people's minds: "Pazi Snajper."

Sniper attacks have since then come to be defined as a sly, disturbing type of murder.

A similar hand-written sign hung in a street on the northern entrance of Aleppo, the largest province in Syria, goes to show that this city is going through a nightmare like that of Sarajevo.

Sharpshooters kill indiscriminately in rebel-held areas, operating from afar in places controlled by the Assad regime. The citizens of Aleppo could not figure out at first where this silent death came from, but then realized it was the snipers, recognized from the silver screen, and started putting up signs.

Arabs call them Qannas, for hunter. A single sniper can sometimes freeze a city of thousands. They're hard to detect and almost impossible to capture or neutralize. A building suspected of housing a sniper is typically bombed to eliminate the threat.

There are a number of ways people in Aleppo try to protect themselves from sniper fire in the city's crowded avenues. Large heaps of sand are dumped on the pavement in some streets to obstruct dangerous vantage points. In some others, there are wooden screens between apartment buildings.

Opposition fighters appear to have worked out snipers' ‘work hours’. A sharpshooter who starts out early in the morning comes down at a specific time in the evening, when the people can finally feel comfortable enough to take to the streets.

According to rebels, almost all snipers are either Hezbollah militants or Iranian fighters. They base this opinion on the identity information they obtained from dead sharpshooters.

One of the most unforgettable events caused by snipers was a massacre witnessed by the AA's Ali Demir near capital Damascus. Sharpshooters killed scores in a street in the suburb of Jobar. Then, they shot at those who came to recover the dead bodies. Everyone else was forced to flee and the bodies left to rot under the heat, giving off an unbearable odor.

The people of Aleppo have had to find ways of clinging to life in this war that has been going on for the last two and a half years. Nearly five million people have established a new life for themselves, one that is compatible with war.

To have a chance of survival, they have become habituated to living in the face of death. Bombardments, artillery fire and snipers all seem to have become commonplace. They have to rear children, bring home food to eat, and try their best to stay alive in the midst of this conflict.

War sets its own culture and rules of living, and imposes them on people. Those who do not obey them cannot survive.

Citizens say bombardments and artillery decreased a bit during Ramadan. In some places, many buildings have been leveled by Scud missiles, while some other areas bear no traces of war. The opposition-held industrial zone seems untouched, for example.

But the historical bazaar and mosque in Aleppo are out of use due to the damage dealt by missiles. The shopkeepers have all but abandoned the city. The citizens can still shop downtown after the heat abates in the evening. Peddlers and small stores sell basic food materials.

Humanitarian aid from Turkey is not distributed in bulk any more, but is delivered straight to households. The struggle for aid matters. Families with no members employed live solely off of these relief items.

A particularly striking image in Aleppo is that of long congregational prayers held in the evening amid the loud bangs of artillery fire. In Ramadan, congregational prayers are sometimes performed with a complete recitation of the Qur'an broken up into thirty parts, to be read throughout the whole month. A single night's prayer can take two hours. And the sounds of falling mortars do nothing to disturb the spiritual atmosphere.

During the night when the AA team attended a congregational prayer in Aleppo, an airstrike on a mosque in northern part of the city killed twelve and injured over fifty. However, neither the number of people attending, nor the length of the prayer changed.