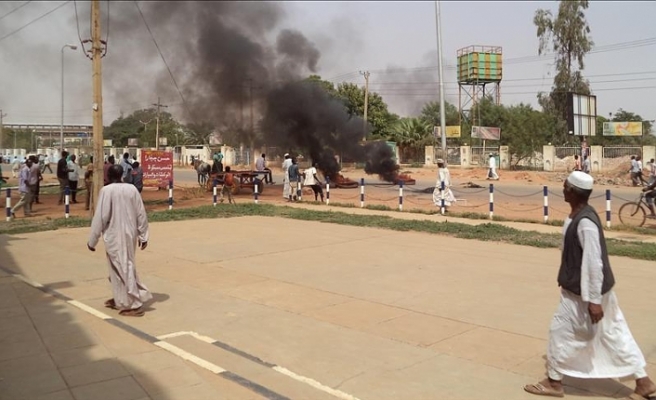 By the end of 2018, eight Arab countries were witnessing protests to condemn deteriorating economic conditions and demand higher standards of living. In a few cases, demonstrators have also articulated political demands.

The protests -- seen in Sudan, Morocco, Libya, Tunisia, Lebanon, Iraq, Jordan and Algeria -- roughly coincide with the eighth anniversary of the “Arab Spring” uprisings, which kicked off in Tunisia in late 2010.

Some Arab demonstrators have drawn inspiration from the ongoing “yellow vest” protests in France, which began in November to protest tax increases on fuel, along with other grievances.

Sudan: From bread to Bashir

Protests in Sudan began on Dec. 19 in 14 of Sudan’s 18 states, including capital Khartoum. Demonstrators decry rampant inflation -- especially skyrocketing bread prices -- and have also made other demands as well.

The demonstrations appear to have escalated this week, with some protesters now explicitly calling for the departure of President Omar al-Bashir and his regime.

While Sudanese officials put the total death toll from the protests -- which in some places have turned violent -- at eight, opposition groups insist that at least 22 people have been killed in the unrest.

The country that kicked off the Arab Spring in 2011 now appears to be witnessing a new wave of protests, which began on Dec. 24 in the western city of Kasserine.

After the suicide of TV cameraman Abdel Razaq Zorgui, who killed himself to protest worsening socio-economic conditions, several clashes between demonstrators and security forces have been reported.

Zorgui’s death has been compared to that of Mohamed Bouazizi, a disaffected Tunisian street vendor who fatally set himself alight eight years ago, sparking the popular uprising that would eventually bring down the Zine al-Abidine Ben Ali regime.

The latest wave of protests began in Morocco on Dec. 17, when workers from both the private and public sectors staged demonstrations in capital Rabat to demand better pay and improved conditions.

One day earlier, Rabat had witnessed a protest march in which demonstrators demanded the release of those arrested while taking part in earlier protests in the country’s northern Al-Rif region.

Hundreds of people were detained during the Al-Rif protests, in which demonstrators demanded more job opportunities and stepped-up local development.

A number of the detained protesters still reportedly remain in police custody.

Libya: Anger in the south

In Libya, meanwhile, protests have been seen in several southern cities to demand more employment opportunities and greater regional development.

On Dec. 8, protesters shut down the Al-Sharara Oilfield before demonstrations spread to other parts of southern Libya.

Since then, Fayez al-Sarraj, prime minister of Libya’s UN-backed government, has vowed to allocate some $85 million for new service projects in the region.

Demonstrators have also taken to the streets to protest worsening economic conditions in Lebanon. Protests have turned violent in some areas, with demonstrators blocking roads and forcing the army to intervene.

As protests have spread from capital Beirut to other parts of the country, demonstrators have voiced three key demands: reduced fuel taxes, a viable public health system, and the re-issuance of interest on Lebanese treasury bonds.

Lebanon’s precarious economic situation has been further aggravated by political wrangling that has delayed formation of the country’s incoming government.

Iraq: Basra and beyond

At one point, angry mobs in Basra attacked state buildings amid mounding popular dissatisfaction with the government.

Since the protests began, scores of Iraqis have reportedly been killed in clashes with security forces.

On Dec. 21, demonstrators in Basra blocked roads leading to the government’s provincial headquarters to demand the governor’s resignation.

Protests also erupted in Jordan this summer after the government proposed a bill that would -- if passed -- raise taxes on income. The government also raised electricity prices five times this year, leading to further popular discontent.

After eight days of demonstrations in May, Prime Minister Hani al-Mulki resigned, after which Omar al-Razzaz was tasked with drawing up a new government.

On Dec. 25, protests erupted in Algeria when a young man, Ayyash Mahjoubi, 31, died after being trapped in a well for six days in Algeria’s southern M'Sila province.

Following Mahjoubi’s death, protesters prevented a government delegation from reaching the well, while delegation members were pelted with stones by angry residents who attributed the young man’s demise to government negligence.

Two weeks earlier, tens of thousands demonstrated in the country’s restive Kabylie region to protest the suspension of a raft of development projects funded by a prominent local businessman.

According to some observers, the demonstration in Kabylie -- in which a number of opposition figures took part -- represented a “show of strength” against Algeria’s ruling regime.