Mideast Quartet envoys to meet in New York on Sunday

Envoys from the quartet of Middle East negotiators will meet on Sunday in a last-ditch push to relaunch Israeli-Palestinian peace talks and avert a showdown over Palestinian statehood at the U.N. 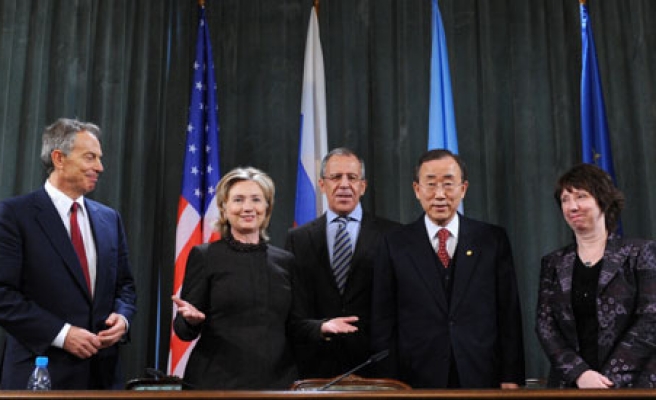 The quartet of Middle East meeting in New York will come two days after President Mahmoud Abbas said he would demand full membership of the United Nations for a Palestinian state when he goes to the U.N. General Assembly next week, setting up a diplomatic clash with Israel and the United States.

"Envoys are meeting on Sunday in New York," the diplomat said.

The efforts of the quartet --- which groups the European Union, the United States, Russia and the U.N. -- are part of an intense international diplomatic push in recent weeks aimed at persuading the Palestinians to drop their U.N. plans.

Washington, and Israel, says a U.N. vote over Palestinian statehood would damage chances for peace negotiations, arguing that a state can only be created through a settlement between the two sides.

The EU, in addition to such concerns, is also facing potential embarrassment at the international forum if a vote splits its 27 members into three camps -- those backing the bid, those opposing it and a possible group of states abstaining.

Reacting to Abbas's intentions, a spokeswoman for EU foreign policy chief Catherine Ashton said the EU has yet to decide how to act at the U.N.

"The next days are crucial," spokeswoman Maja Kocijancic said. "It is for Palestinians to decide on next steps but we continue to believe that a constructive solution that can gather as much support as possible and allows for the resumption of negotiations is the best and only way to deliver the peace and two state solution the Palestinian people want."

"We will redouble our efforts together with our partners in the quartet to launch negotiations between the parties as soon as possible. This remains the only way to end the conflict," Kocijancic said.
In a televised speech on Friday, Abbas said he would request the Palestinians' "legitimate right, obtaining full membership for Palestine".

The Palestinians say almost 20 years of on-off direct talks on statehood envisaged by interim peace accords have hit a dead end. They say reasons for this include Israel's refusal to stop expanding settlements in the West Bank and East Jerusalem -- lands it took in the 1967 Arab-Israeli war and which Palestinians want, along with the Gaza Strip, for an independent state.

The last round of the U.S.-backed talks between Abbas and Israeli Prime Minister Benjamin Netanyahu collapsed nearly a year ago when the Jewish state declined to extend a partial moratorium on West Bank settlement building.