International Quds Day rallies will be held today in over 80 countries across the world. 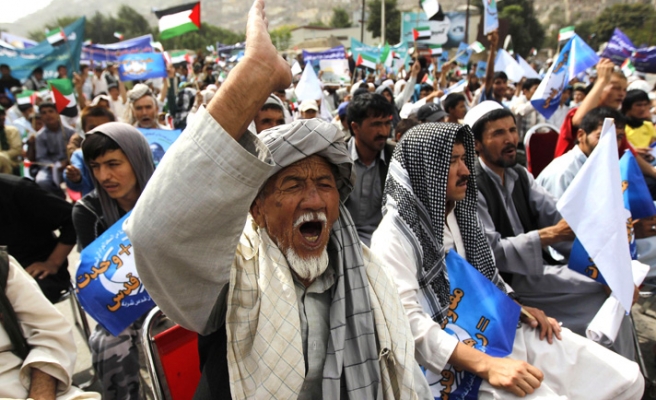 Millions of Muslims around the world are set to hold rallies in support of the Palestinian people to mark the International Quds Day.

The rallies will be held on August 2 in over 80 countries across the world.

Chairman of the Free Jerusalem Platform Fikri Karavil said on Friday, "Palestine issue is not the problem of only Palestinian Muslims, it is the common problem of all Muslims."

A press statement was made following a Friday prayer held by the Free Jerusalem Platform in Turkey's southeastern province of Diyarbakir for the "International Al-Quds Day -- Jerusalem Day --".

Karavil emphasized that due to Israeli tunnels, Al-Aqsa Mosque is in danger of being demolished and noted, "the Palestine issue is not the problem of only Palestinian Muslims, it is the common problem of all Muslims. The case of Jerusalem and Palestine should always be the top agenda topic of all Muslims."

Al-Quds Day is commemorated in some countries in the Arab and Muslim world on the last Friday of holy month Ramadan with protests against the Israeli occupation of Jerusalem.

In August 1979, the late founder of the Islamic Republic Grand Ayatollah Ruhollah Khomeini declared the last Friday of the Muslim holy month of Ramadan as Quds Day, calling on Muslims to mark the annual occasion by holding street rallies.

The World Quds Day rallies will be held this year amid a recent effort by the US Secretary of State John Kerry to restart the so-called Israeli-Palestinian peace talks.

On July 29, representatives of the Palestinian Authority and the Israeli regime started the talks in Washington over the future of Israeli settlements in the occupied territories and the fate of Palestinian refugees.

In the capital of Baku about 150 people attended the protests in the village Nardaran.

The protesters showed their solidarity with the struggle of the Palestinian people and called for an end of the human rights violations. They shouted anti US and Israel slogans and expressed their anger about the occupation of Nagorno Karabagh.

They demanded an end of the occupation of Palestine and Nagorno Karabagh.

Another protest started in front of the Israeli Embassy in Baku where about 50 members of the Azerbaijan Islamic Party shouted slogans.

Thousands of Iranians started marching early in the morning from several locations in Tehran towards Tehran University and attended the Friday prayer there.

"All Muslims should unite and show solidarity to solve the Palestine issue," Ahmadinejad told crowds in a speech before the Friday prayer.

He blamed the West for protecting "the zionist regime more than it protected democracy, justice, freedom and even their own rights."