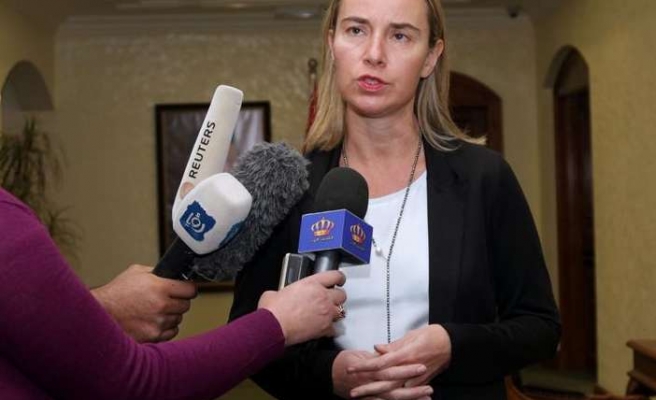 Their comments on Tuesday followed worsening clashes between Palestinians and Israelis which flared after Israeli police and settlers stormed the Al-Aqsa Mosque complex in occupied East Jerusalem last week.

Tensions have soared over demands by Jewish hardliners to be allowed to pray inside the mosque compound, which is holy for both Muslims and Jews, and the expansion of Israeli settlement activity in annexed Arab east Jerusalem.

"I am particularly sad and worried about the escalation of violence that we are witnessing in these hours and the killing of the Israeli citizens yesterday," Mogherini said, speaking at the Berlin Foreign Policy Forum.

"I think this demonstrates to us very clearly that if we do not offer the political perspective both for the Israelis to live in security and for the Palestinians to have a state, their own state, violence is to come back to the table very soon and in a very dramatic way," he warned.

Mogherini, the EU's High Representative for Foreign Affairs and Security Policy, said she has discussed the current situation in the Middle East with Steinmeier and shared her impressions from her visit over the weekend in Israel and Palestine.

Tension has been running high in the region since Israeli authorities first sealed the Al-Aqsa Mosque complex two weeks ago after the shooting of an extremist Jewish rabbi in the city, before reopening it hours later.

The unrest worsened after Israeli forces killed a young Palestinian man suspected of shooting the rabbi in a raid last week on his East Jerusalem home.

An Israeli girl was also killed on Monday when a Palestinian stabbed three Jewish settlers in the West Bank.

The attack came shortly after an Israeli soldier was injured after being stabbed near a Tel Aviv train station by a Palestinian from the Askar refugee camp in the West Bank city of Nablus.

Mogherini urged steps towards a de-escalation in the conflict and a return to the negotiating table.

“We need a Palestinian state living in peace and security next to the Israeli state,” Mogherini stressed.

Steinmeier extended Germany’s support to the diplomatic efforts of Mogherini, who was making her first to Berlin after assuming office earlier this month.

“The crisis and conflicts of our time clearly show us, more clearly than ever, the urgent need for a common European foreign policy,” Steinmeier added.

He said there was a need for a sustainable ceasefire between Israel and Palestinian groups which "should also give a perspective on a return to negotiations on a two-state solution".

“We have to prevent a climate of fear and threats prevailing in the region again. We should replace it with a future perspective for the people in the two sides," he said.