Thousands of Morsi loyalists have been camping out in Rabaa Al Adawia Square in Cairo and Nahda Square in Giza to demand Morsi’s return to power. 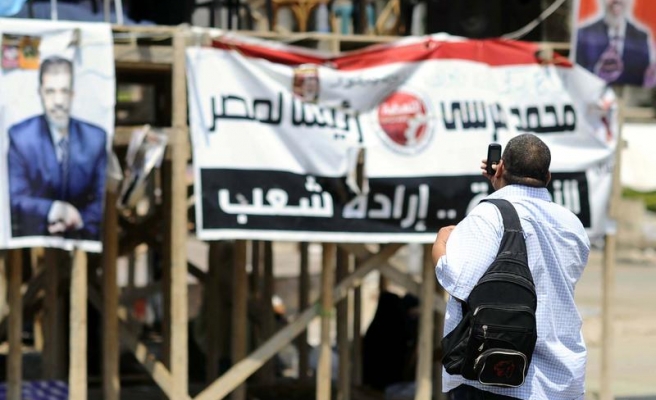 Egypt was bracing for more protests by supporters and opponents of deposed President Mohammad Morsi on Sunday, a day after deadly confrontations between the two rival groups.

A pro-Morsi coalition has called for massive demonstrations across Egypt to press for Morsi's reinstatement.

"The Egyptian people are invited to assemble in the squares across Egypt on Sunday to support legitimacy and press for returning Morsi to power," the National Coalition for Supporting Legitimacy said in a statement.

Morsi, Egypt’s first democratically elected president, was removed by the army on Wednesday after millions of Egyptians protested against his regime.

The coalition, led by the Muslim Brotherhood, also rejected the dissolution of the Shura Council, upper house of Egypt's parliament.

The Brotherhood said the move "signals the end of the state of institutions" in Egypt.

Thousands of Morsi loyalists have been camping out in Rabaa Al Adawia Square in Cairo and Nahda Square in Giza to demand Morsi’s return to power.

The Muslim Brotherhood, from which Morsi hails, has vowed peaceful protests across Egypt until the elected president is reinstated.

In response, the opposition June 30 Front has called mass protests in support of the army’s overthrow of Morsi.

The front called on Egyptians to rally in the iconic Tahrir Square and the Ittihadiya presidential palace and elsewhere in the country in a mass protest themed “National Independence”.

Morsi’s opponents are planning a mass rally also in the Upper Egypt governorate of Assiut.

Demonstrators will call for purging Brotherhood loyalists from public institutions in the governorate.

Egypt has been ravaged by violent confrontations between Morsi’s supporters and foes since his ouster.

At least 44 people were killed Friday in deadly clashes between Morsi loyalists and opponents across Egypt.

Egyptian authorities have arrested a number of top Muslim Brotherhood leaders on charges of inciting violence.