"Our peaceful protests are mightier than tanks and bullets," Badie told tens of thousands of cheering Morsi supporters in Rabaa Al Adawia Square in the Cairo district of Nasr City. 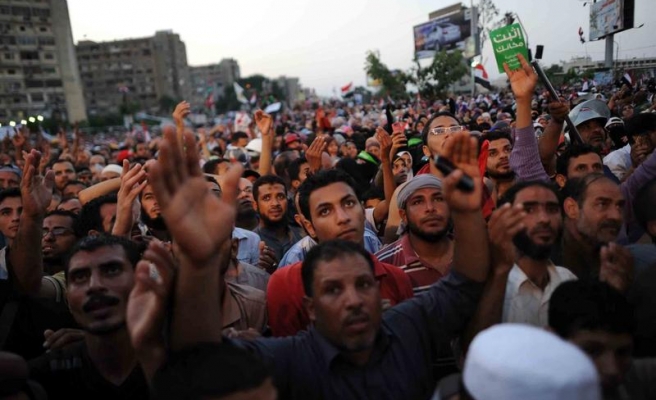 Muslim Brotherhood’s supreme leader Mohamed Badie insisted Friday that Mohammad Morsi remains "the legitimate president of Egypt" and he must be reinstated, in a show of defiance against the army’s roadmap which saw the head of the constitutional court being sworn in as interim president.

"Millions of people would remain in the streets until Morsi is reinstated," Badie told tens of thousands of cheering Morsi supporters in Rabaa Al Adawia Square in the Cairo district of Nasr City.

The loyalists have been staging a sit-in in a show of unwavering support for Morsi, dismissing his overthrow as a military coup.

"Egypt will not accept a military rule again," a defiant Badie told his audience of loyalists.

"Our peaceful protests are mightier than tanks and bullets."

Egyptian military chief and Defense Minister Abdel Fatah al-Sisi announced on Wednesday a roadmap for the future of Egypt which temporarily suspended the constitution and named the head of the constitutional court as interim president after massive protests against Morsi.

The Muslim Brotherhood leader denied reports that he had tried to flee the country or was arrested.

“Don’t believe all these lies,” the supreme guide told the protesters.

Several leading figures of the Brotherhood and its Freedom and Justice Party have been arrested since Wednesday.

Badie insisted that Morsi, a member of the Muslim Brotherhood, is "the legitimate president of all Egyptians."

“We don’t recognize the legitimacy of anyone except Morsi and elected institutions,” Badie said.

The Brotherhood leader urged the military to reinstate the elected president and respect his legitimacy.

“I tell the military leaders that Morsi is your supreme leader,” he said.

“They scare you from Islam in order to turn against your people and your Muslim brothers.

“It is high time for you to return to your original role of protecting the borders,” he said in an appeal to the powerful military.

“You are a religious symbol, but you cannot monopolize the Egyptian people,” he said.

The Brotherhood leader also lashed out at Pope Tawadros II.

“Don’t talk in the name of the Copts. You are only a religious symbol,” he said, accusing the pope of violating his predecessor’s legacy of not interfering in politics.