Clashes broke out in central Cairo when supporters of ousted President Mohamed Morsi came under attack as they marched to the Interior Ministry. 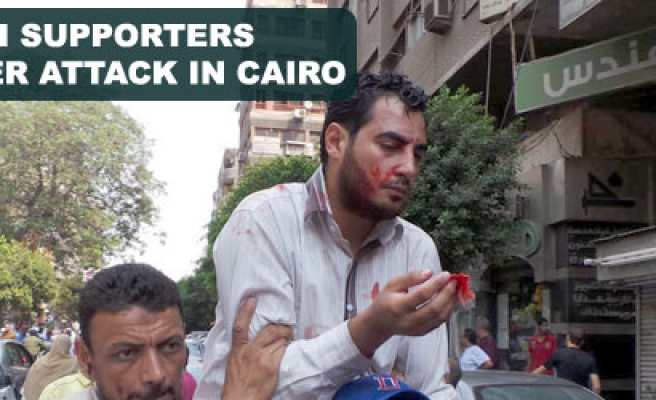 Clashes broke out in central Cairo on Tuesday when supporters of ousted President Mohamed Morsi came under attack as they marched to the Interior Ministry, a Reuters reporter said.

Supporters of the new military-installed government hurled stones at the marchers and threw bottles at them from balconies. Police then fired tear gas at the pro-Morsi protesters.

A few thousand pro-Morsi protesters were taking part in the march when the trouble erupted. Local residents taunted them, calling them terrorists and saying they were not welcome. They then began throwing stones at them.

A number of protesters suffered teargas inhalation before the protest was dispersed.

The protesters are calling for the reinstatement of Morsi, who was overthrown by the military on July 3 and is now being held at undisclosed location.

The march on the ministry was called for by the National Alliance for the Defense of Legitimacy, a coalition of largely Islamist groups and figures, as part of planned million-strong demonstrations Tuesday.

According to the alliance, marches will set out from 28 mosques throughout the capital towards Cairo's Rabaa al-Adawiya Square and Giza's Nahda Square, where pro-Morsi demonstrators have held two sit-ins for 47 and 42 days respectively.

The Tuesday marches are to be held under the banner 'Together against the Coup and Zionism,' referring to Morsi's July 3 ouster – which critics call a "military coup" – and a Friday air raid that killed four fighets in Egypt's Sinai Peninsula. Armed groups have blamed Friday's attack on Israel.

The government has said that it views the twin sit-ins as a "threat" to Egypt's national security. Last week, it mandated the Interior Ministry – which controls Egypt's sprawling police apparatus – to take "all necessary measures" to disperse the demonstrations.