The alliance asked the international community to reject “Sisi’s bloodshed plot,” saying the army chief should stand trial before the International Criminal Court on crimes against humanity. 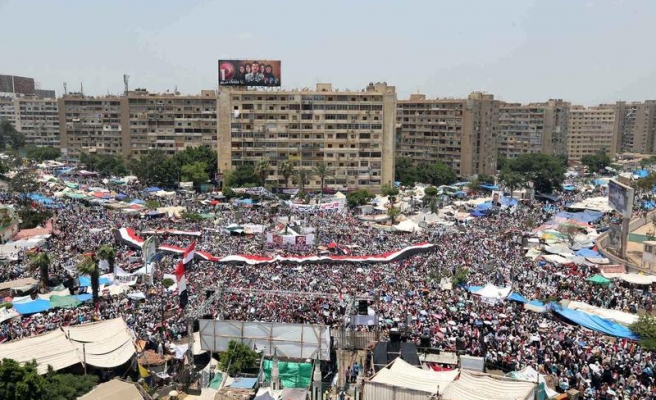 The National Alliance for the Defense of Legitimacy on Wednesday dismissed army chief and Defense Minister Abdel-Fatah al-Sisi’s call for mass protests on Friday as a “clear call for civil war,” confirming earlier plans for mass marches and demonstrations in Cairo and Giza.

“This speech of incitement is clear evidence that the coup leaders have lost their balance,” said the alliance, a coalition of Islamist parties, groups and figures.

“Our revolution is peaceful and no one will drag us into violence.”

Egypt's three Christian churches have welcomed al-Sisi's call for mass Friday protests, while Islamist parties and forces described it as a dangerous step that could lead to "civil war."

The alliance asked the international community to reject “Sisi’s bloodshed plot,” saying the army chief should stand trial before the International Criminal Court on crimes against humanity.

It renewed its call for the Egyptian people to take to the streets on Friday to oppose the military ouster of elected president Mohamed Morsi.

The alliance confirmed that 34 marches would be organized in Cairo and Giza on Friday as previously announced to “demonstrate opposition to the military coup.”