Morsi backers have set up a round-the-clock vigil outside a mosque in the Cairo suburb of Nasr City. Thousands flocked there on Friday to join protests that swelled after noon prayers. 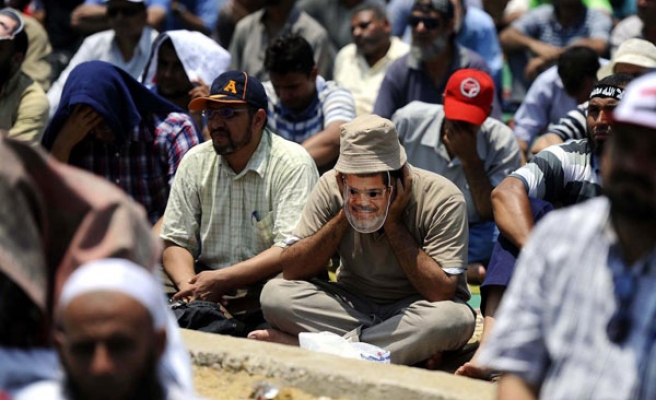 Thousands of supporters of elected Egyptian President Mohamed Morsi rallied in Cairo on Friday to demand the restoration of the ousted Islamist leader, with his opponents also planning protests nearby.

Two formations of fighter jets screamed over the sun-baked city after noon prayers ended. Four army helicopters circled, while another five, trailing Egyptian flags, flew low over Cairo roof tops, in a clear show of strength by the military.

More than two weeks after Egypt's powerful military shunted the contested Morsi from office, there was still no sign of a possible deal to defuse the crisis, which has divided the most populous Arab state and alarmed its Western allies.

The Muslim Brotherhood has called for demonstrations around the country, accusing the head of the armed forces, General Abdel-Fattah al-Sisi, of staging a coup to sweep Egypt's first freely elected president from power.

The army said it had to intervene after mammoth street protests against Morsi, who was criticised as incompetent and partisan, and has installed an interim cabinet to prepare for elections. It includes no members of Mursi's Muslim Brotherhood or other Islamist parties previously in government.

Morsi backers have set up a round-the-clock vigil outside a mosque in the Cairo suburb of Nasr City. Thousands flocked there on Friday to join protests that swelled after noon prayers.

"Tonight, tonight, tonight, Sisi is going down tonight," a man shouted out, leading the chants. A huge banner showed a picture of the bearded Morsi against Egyptian flags and read: "Together to support legitimacy."

Police fired shots in the air to disperse them and arrested two Brotherhood supporters after they fought opponents with fists and rocks, they said. No casualties were reported.

Egypt's closest Western ally, the United States, has tried to tread softly through the crisis, still undecided whether to brand the downfall of Mursi a military coup - a move that would force Washington to suspend its large aid programmes for Cairo.

In his first address since taking office, interim President Adli Mansour promised on Thursday night to fight people he said wanted to destabilise the nation.

"We are going through a critical stage and some want us to move towards chaos and we want to move towards stability. Some want a bloody path," he said in a televised address. "We will fight a battle for security until the end."

Tamarud, the youth movement which organised enormous anti-Mursi protests on June 30, is also planning rallies on Friday, including one close to the Muslim Brotherhood's Nasr City vigil.

It dubbed its protests as "the people against terrorism", blaming Morsi followers for recent violence.

Policing was intensified on Friday and 10 armoured personnel carriers were parked on a Nile bridge in central Cairo, a route Islamist protesters would have to cross if they tried to reach Tahrir Square, a focal point for the anti-Mursi camp.

At least 99 people have died in violence since Mursi's removal, more than half of them when troops fired on  protesters outside a Cairo barracks on July 8.

Supporters of the ousted president said they had come from across the country to join Friday's rallies, underlining the Muslim Brotherhood's deep roots in the provinces.

"We are coming out today to restore legitimacy," said Tarek Yassin, 40, from the southern city of Sohag. "We consider what happened secular thuggery. It would never happen in any democratic country."

Muslim Brotherhood leaders say they will not resort to violence in their campaign to reinstate Morsi, held by the army incommunicado since July 3, and insist they will not back down.

"The goal of our peaceful mass rallies and peaceful sit-ins in squares across Egypt is to force the coup plotters to reverse their action and force the coup supporters to change their position," Essam el-Erian, a senior Brotherhood official, said on his Facebook page.