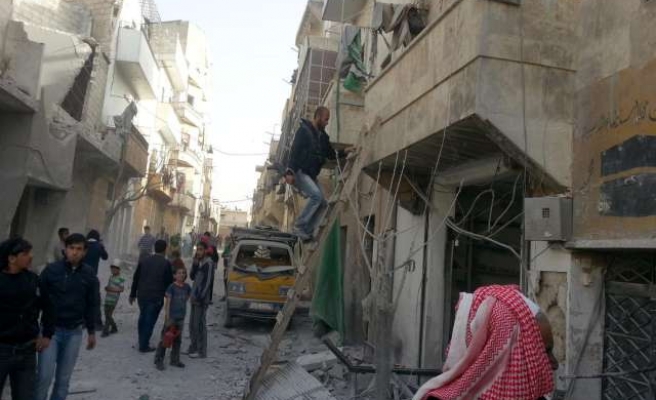 At least 13 people were killed by mortar fire in government-held areas of Syria on Saturday, including central Damascus, a monitoring group and state media said, just days after President Bashar al-Assad said he would seek another term in office.

The attacks occurred as activists said rebel fighters had delayed their planned withdrawal from the Old City district of Homs, once called the "capital of the revolution", although a ceasefire with government forces continued there.

Damascus residents say the rebels have stepped up mortar attacks into the government-held capital in recent weeks as government forces have tightened their grip over central parts of the country.

Syria's state news agency SANA blamed "terrorists" for the mortar attack in Damascus, saying it killed four people including a 16-year-old girl when it struck a minibus in the al-Dwel'a area of the capital.

It said 12 other people were killed in mortar attacks that hit a hospital and a hotel in the northern city of Aleppo, a major commercial hub before the war which is now divided between rebel and government forces.

The Britain-based Syrian Observatory for Human Rights, an anti-Assad group which monitors the violence in Syria through a network of sources, also reported the incidents, saying at least three died in the Damascus attack and at least 10 in Aleppo.

At least 14 people were killed by a mortar attack on a mainly Shi'ite area of the capital on Tuesday.

Assad has defied international opponents and the rebels who have been trying to overthrow him for over three years with his announcement that he planned to seek another term in elections in June.

Syrian authorities have tried to project an air of normalcy in the areas they control, despite the ravages of a conflict that has killed over 150,000 people, forced millions to flee their homes and devastated much of the country's infrastructure.

Fighting was reported in nearly every other province of Syria on Saturday, including between the Nusra Front and the Islamic State of Iraq and the Levant in the eastern Deir al-Zor province. Fighting often claims over 200 lives a day.

The Observatory also said the death toll from a pair of car bombs in largely Alawite areas of the central province of Hama on Friday had risen to at least 29, including 14 children.

Meanwhile, a Syrian Army plane launched an air offensive on the main water pipeline to the city of Aleppo Saturday, damaging it in an attempt to block the flow of drinking water into the city.

Mustafa Sultan, a local activist, told Anadolu Agency that the attack caused heavy damage to the water supply line of Syria's largest city and the streets have been flooded since leaving the city without water.

He added that the civil defense teams and the city council are striving to fix the pipeline amid ongoing clashes in the region between Assad's regime forces and the Free Syrian Army.

In Homs, Syrian authorities had agreed to a 24-hour ceasefire with rebel fighters on Friday to allow for them to pull out from the Old City after blockading it for over a year. A rebel pullout from the central city would be a major symbolic advance for Assad ahead of his likely re-election.

One activist in Homs said the ceasefire continued and the pullout would probably still be carried out within the week, but did not give details about why the withdrawal was delayed.

"In the end they might implement it but the problem is they are playing fast and loose as usual," he said by Skype, referring to government forces.

The Observatory said negotiations were continuing between the government and rebel groups over the details of the withdrawal plan, with mediation from local councils and the United Nations.

In early February, hundreds of civilians were allowed to leave central Homs during a ceasefire overseen by the United Nations and Red Crescent. Many rebels stayed on despite being outgunned and surrounded.